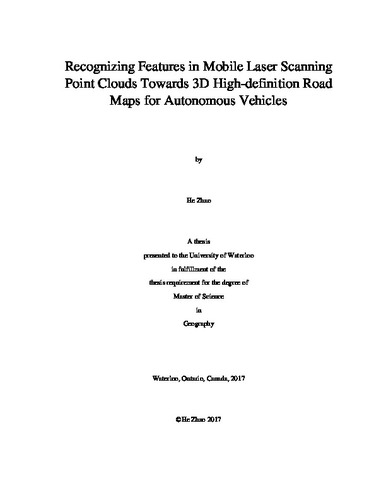 The sensors mounted on a driverless vehicle are not always reliable for precise localization and navigation. By comparing the real-time sensory data with a priori map, the autonomous navigation system can transform the complicated sensor perception mission into a simple map-based localization task. However, the lack of robust solutions and standards for creating such lane-level high-definition road maps is a major challenge in this emerging field. This thesis presents a semi-automated method for extracting meaningful road features from mobile laser scanning (MLS) point clouds and creating 3D high-definition road maps for autonomous vehicles. After pre-processing steps including coordinate system transformation and non-ground point removal, a road edge detection algorithm is performed to distinguish road curbs and extract road surfaces followed by extraction of two categories of road markings. On the one hand, textual and directional road markings including arrows, symbols, and words are detected by intensity thresholding and conditional Euclidean clustering. On the other hand, lane markings (lines) are extracted by local intensity analysis and distance thresholding according to road design standards. Afterwards, centerline points in every single lane are estimated based on the position of the extracted lane markings. Ultimately, 3D road maps with precise road boundaries, road markings, and the estimated lane centerlines are created. The experimental results demonstrate the feasibility of the proposed method, which can accurately extract most road features from the MLS point clouds. The average recall, precision, and F1-score obtained from four datasets for road marking extraction are 93.87%, 93.76%, and 93.73%, respectively. All of the estimated lane centerlines are validated using the “ground truthing” data manually digitized from the 4 cm resolution UAV orthoimages. The results of a comparison study show the better performance of the proposed method than that of some other existing methods.