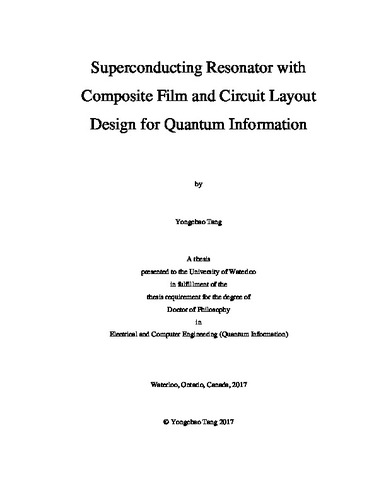 The full manipulation of a quantum system can endow us with the power of computing in exponentially increased state space without exponential growth of physical resources. High-quality, innovative superconducting films plays a key role in the next stage of development of large-scale superconducting quantum computing protected by error correction. The further development of quantum error correction theory should also be tailored to the devices’ limitations brought by modern nanofabrication. Neither hardware nor software shall be absented for realizing efficient quantum information processor. In this thesis, we are dedicated to the development in the material of superconducting devices and its application in future large-scale quantum computation with error correction methods. For the hardware, we developed composite superconducting films for resonators in the application of low-temperature pulsed-ESR for quantum information processing making use of proximity effect. The superconducting resonator is also the key element in superconducting circuits for quantum storage and quantum bus. We compared the performance of superconducting resonators made from single Nb film with those of composite films, including Nb/NbN/Nb, TiN/tapering/NbN/tapering/TiN, and Al/Nb/Al. We found that the quality factor of resonators from Al/Nb/Al surpasses the previous best results from single Nb film under 0.35 T magnetic field. A formula was established for evaluating the surface impedance of composite superconducting film. It has been proved that adjusting phonon density of states in superconducting films can tailor the recombination time of Cooper pairs in thin films and hence affect the coherence time of qubits and Q values of resonators. For the software, we improved the surface code theory to make it resistant to sparse fabrication defects. A physically faulted qubit can be replaced with a working physical qubit near the defective one. Thereby sparse fabrication errors can be collected into one sacrificial layer and isolated from the working layers by turning off their controllable couplers. We proposed a two-dimensional quantum annealing architecture to solve the 4th order binary optimization problem by encoding four-qubit interactions within the coupled local fields acting on a set of physical qubits. We also designed a layout to implement quantum annealing with error correction through stabilizer codes. The stabilizers are realized with weak measurements for real-time, in-run monitoring of spins, to minimize or control the back-action.