Some Upper and Lower Bounds regarding Query Complexity 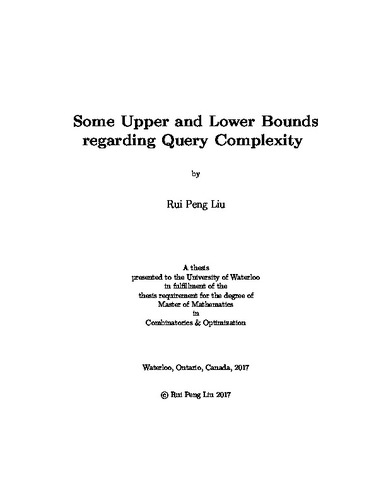 Query complexity is one of the several notions of complexity de ned to measure the cost of algorithms. It plays an important role in demonstrating the quantum advantage, that quantum computing is faster than classical computation in solving some problems. Kempe showed that a discrete time quantum walk on hypercube hits the antipodal point with exponentially fewer queries than a simple random walk [K05]. Childs et al. showed that a continuous time quantum walk on \Glued Trees" detects the label of a special vertex with exponentially fewer queries than any classical algorithm [CCD03], and the result translates to discrete time quantum walk by an e cient simulation. Building on these works, we examine the query complexity of variations of the hyper- cube and Glued Tree problems. We rst show the gap between quantum and classical query algorithms for a modi ed hypercube problem is at most polynomial. We then strengthen the query complexity gap for the Glued Tree label detection problem by improving a classical lower bound technique; and we prove such a lower bound is nearly tight by giving a classical query algorithm whose query complexity matches the lower bound, up to a polylog factor.