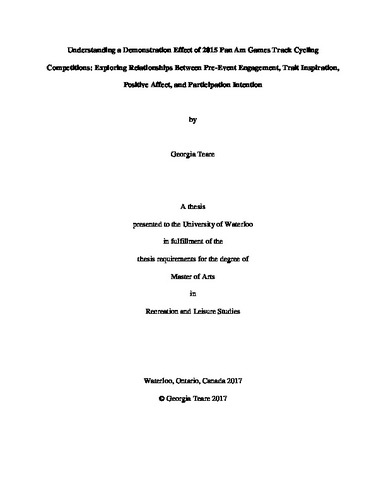 The demonstration effect occurs when “people are inspired by elite sport, sports people or sport events to actively participate themselves” (Weed et al., 2015, p.197). Theoretical underpinnings of demonstration effects are not well established in the literature (Potwarka, 2015). Thus, the purpose of this thesis was to identify intrapersonal and experiential mechanisms that might help explain demonstration effects. To achieve this purpose, spectators of the 2015 Pan American Games track cycling competitions (n=381) were surveyed. Relationships between pre-event engagement, trait inspiration, positive affect, and intention to participate in track cycling after watching 2015 Pan Am Games track cycling competitions were examined using structural equation modelling (AMOS). Both pre-event engagement and trait inspiration were found to significantly influence both positive affect and participation intention. Positive affect was found to have no significant influence on participation intention, and did not serve as a mediating variable between pre-event engagement and participation intention, or between trait inspiration and participation intention. This thesis reveals that being aware of, interested in, and identifying as a fan of the sport on display is a very important predictor of intention to participate in the sport on display. Furthermore, those who have high trait inspiration are also likely to have positive intentions toward participation in the sport on display. Interestingly, however, a key finding of this thesis is that simply feeling good during the event does not influence spectators’ intentions to participate in the sport on display. Implications for theory and practice, and suggestions for future research are discussed.