Effect of Fuel Ethanol on Subsurface Microorganisms and its Influence on Biodegradation of BTEX Compounds. 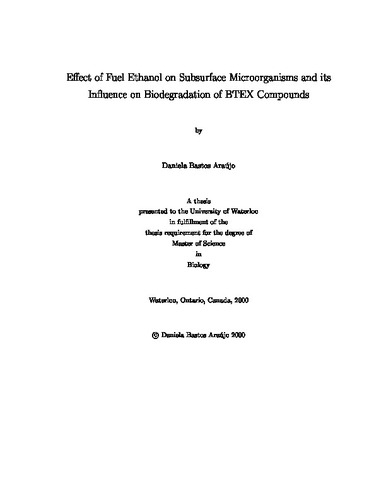 Ethanol is used as fuel in neat form in some countries (Brazil and India) or blended with gasoline (Europe, Canada and the United States). The benefits of ethanol use include octane enhancement, a cleaner environment and a secure renewable energy supply. BTEX compounds (benzene, toluene, ethylbenzene, m-xylene, p-xylene and o-xylene) are aromatic hydrocarbons present in gasoline. The fate of these compounds in the environment is of great health concern due to their carcinogenic (benzene) and toxic properties, and due to their high solubility in water compared to the other gasoline hydrocarbons. Ethanol present in gasoline may affect BTEX degradation, in an event of a spill into the subsurface environment. To address the effects of ethanol on subsurface microorganisms, microbial activity and growth in the presence of ethanol (concentrations ranging 0 to 70% v/v) were assessed. Microcosms studies showed that ethanol at concentration ranging 0. 5 to3% (v/v) enhanced microbial activity and did not interfere inmicrobial growth at 10oC temperature, when another source of carbon was present (glucose). Ethanol at 0. 5% concentration enhanced microbial activity over water soluble gasoline components and R2A medium combined. Both microbialactivity and growth were not detected at ethanol concentrations equal and above 5%. Biodegradation study was conducted, in which subsurface material and ground water were exposed to BTEX and ethanol at 0. 5 and 1. 5% (v/v) concentration. The controls had BTEX alone and ethanol alone, sterile and nutrient-free. Total BTEX degradation was observed whenever ethanol was absent. Ethanol and BTEX were simultaneously degraded, however in microcosms containing 0. 5% ethanol, BTEX degradation was slowed, compared to microcosms without ethanol. Competition for inorganic nutrients was the major problem in slowed BTEX degradation in the presence of ethanol. In microcosms where 1. 5% ethanol was present, BTEX compounds and ethanol degradation were not observed.

Daniela Araujo (2000). Effect of Fuel Ethanol on Subsurface Microorganisms and its Influence on Biodegradation of BTEX Compounds.. UWSpace. http://hdl.handle.net/10012/1224