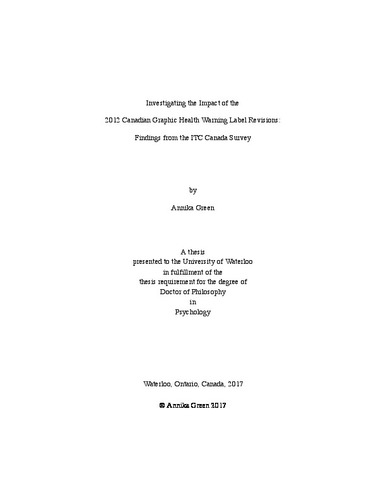 Background: Approximately 100 Canadians die every day from smoking-related illnesses. Health warnings labels (HWLs) on cigarette packages are a highly cost-effective strategy to inform the public on the health risks of smoking and to motivate smokers to quit. Warnings that display graphic images have been shown to be particularly effective in increasing quit intentions and cessation-related behaviours. Canada became the first country to implement graphic HWLs on cigarette packages in June 2001. The Canadian graphic HWLs were revised in 2012. Objectives: This is the first longitudinal study to evaluate the impact of the 2012 Canadian graphic HWL revisions on: 1) Key indicators of warning label effectiveness (warning salience, and cognitive and behavioural HWL responses); 2) Affective reactions evoked by warnings; 3) Beliefs about smoking-related health statements displayed on warnings; 4) Rates of reading interior efficacy messages; 5) Levels of quit-efficacy and perceived difficulty to quit smoking; and 6) Quit intentions and cessation-related behaviours. Moderation of the impact by socioeconomic status (SES) was explored for each outcome. Mediation of the effect of HWLs on smokers’ quit intentions and quit attempts through cognitive and affective reactions was also tested through a series of mediation models. Methods: Data for this study were taken from Waves 1 to 9 (conducted between 2002 and 2014) of the ITC Canada Survey, a nationally representative longitudinal survey of smokers aged 18 years and older (n=5929). Using generalized estimating equations and segmented regression models, the overall secular trends of cognitive and behavioural outcomes were investigated to assess the impact of the 2012 graphic HWL revisions. Structural equationmodeling was used to test mediation of HWL impact on quit intentions through cognitive and affective reactions. Results: Following the 2012 Canadian graphic HWL revisions, significantly more smokers reported to notice warnings “often” or “very often”, think “a lot” about health risks of smoking and about quitting due to warnings, and avoid warnings. The HWL revisions also increased affective reactions evoked by warnings and warning believability (which were positively associated with quit intentions and quit attempts). Adding health messages to warnings significantly increased rates of correct beliefs about these health facts, and the removal of health information was shown to decrease positively trending rates in correct beliefs, and even reduce them. Although few smokers (15%) reported to read the interior efficacy messages in 2013, those who did had significantly higher levels of quit-efficacy, quit intentions, and were more likely to call the toll-free quit line. Quit-efficacy decreased and perceived difficulty to quit smoking increased following the 2012 HWL revisions, but these measures were not associated with quit attempts. Rates of calling the quit line more than doubled after the revisions (which included the addition of the toll-free quit line number on cigarette packages). Quit intentions and cessation- related behaviours did not significantly change, with the exception of rates of sustained smoking cessation, which significantly increased. Affective reactions evoked by the graphic HWLs significantly mediated the impact of HWLs on smokers’ intentions to quit, but only after the warnings were revised in 2012. SES was not found to moderate the impact of the HWL revisions on any cognitive or behavioural outcome measures. Conclusions: The 2012 HWL revisions were successful in reducing and even reversing the effects of wear-out, which were shown to be progressively diminishing the effectiveness of the Canadian graphic HWLs between 2002 and 2011. Affective reactions evoked by the graphic HWLs were significantly and positively associated with increased cessation-related cognitions and behaviours, supporting the implementation of emotionally evocative warnings. The impact of the 2012 graphic HWL revisions was just as strong among smokers with a low income and education as it was among smokers with a high income and education.