Hydrogeologic Analysis of a Complex Aquifer System and Impacts of Changes in Agricultural Practices on Nitrate Concentrations in a Municipal Well Field: Woodstock, Ontario 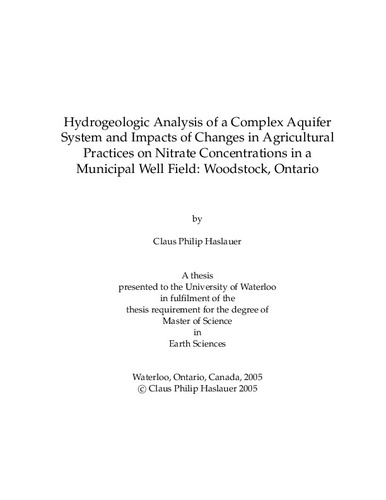 The Thornton Well Field, located in an area of dominantly (~80%) agricultural land-use, produces ~50% of the drinking water for the city of Woodstock. Since the mid 1990?s nitrate concentrations in some of the supply wells are above the Maximum Allowable Concentration (MAC) of 10mg-N/L. The source of the nitrate is believed to be from agricultural fertilizing practices. As response to this problem, the County of Oxford purchased 111 hectares of farmland within the capture zone of the Thornton Well Field. This land is rented back to farmers with restrictions placed on the amount of nitrate fertilizer that can be applied in an attempt to sustainably reduce the nitrate concentrations in the ThorntonWell Field below MAC. <br /><br /> The objective of this thesis is to improve the site conceptual hydrogeologic model, both at a spatial scale suitable for numerical analysis through regional groundwater flow modelling (representative distance ~9km) and at a smaller scale (representative distance ~2km) for nitrate transport modelling in the vicinity of the Thornton Well Field and the purchased land. Field investigations aimed to support the site hydrogeologic model involved drilling, geologic logging, and instrumentation of a 72m deep borehole completed to bedrock in the center of the nitrate plume, at the border of the farmland under consideration. The shallow subsurface features encountered during this initial drilling operation were tracked below the farm fields with geophysical tools and additional drilling and core logging throughout the field site. Transient hydraulic head observations in combination with on-site precipitation measurements were used to indicate where a hydraulic connection between ground surface and deeper layers exists, which allow rapid infiltration to occur into a glaciofluvial outwash channel which was identified as one important pathway for nitrate transport to the Thornton Well Field. One receptor at the end of that pathway, the screen of the supply Well 01, was depth-discrete profiled for water inflow and nitrate concentrations to obtain better characteristics of the receptor. <br /><br /> A method was developed to estimate the nitrate mass stored in the unsaturated zone below Parcel B, permitting an estimation of the time frame required for flushing the nitrate out of this zone, and the anticipated effects on nitrate concentrations in the supply wells. The spatial distribution of nitrate concentrations in the unsaturated zone and in the aquifer units was analyzed. It was found that the nitrate concentration within the unsaturated zone below Parcel B is ~16mg-N/L, resulting in a total nitrogen mass of ~20t within that zone. It was shown that significant reductions (~10%) in nitrate concentrations in the supply wells of the Thornton Well Field can be achieved, assuming zero nitrate mass influx into the domain from Parcel B. <br /><br /> A comprehensive data base was developed to organize, manage, and analyze all site measured data for that purpose, and regional hydrogeologic data from the MOE Water Well Record Database. The contents of this database in conjunction with the MOE Water Well Record Database were used to construct a three-dimensional digital representation of the hydrostratigraphic units at a regional and at a local scale. This three-dimensional hydrostratigraphic unit spatial distribution along with surface watershed information and potentiometric surfaces of the various aquifer units will be used to define a suitable spatial domain and associated boundary conditions for future modelling efforts. This hydrostratigraphic model will serve as basis for predicting the effects of agricultural land-use changes within the capture zone of the Thornton Well Field (Parcel B) on the nitrate concentrations in the supply wells of the Thornton Well Field.