On Perturbative Methods in Spectral Geometry 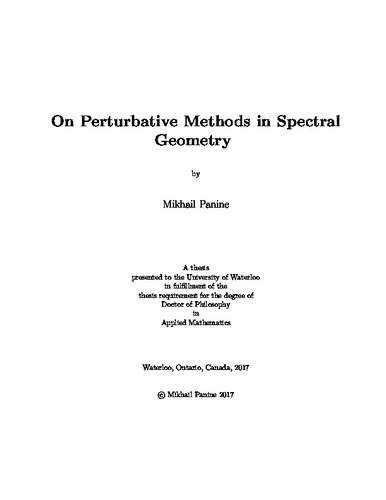 The goal of spectral geometry is to establish how much information about the geometry of compact Riemannian manifolds is contained in the spectra of natural differential operators, especially Laplacians, defined on them. Ideally, one would like to be able to recover the Riemannian manifold, up to isometry, from the spectra of one or several such operators. This would be a very powerful result, as it would introduce an invariant way to describe the shape of Riemannian manifolds. The consequences of such a result would range from practical applications such as shape recognition to theoretical insights into quantum gravity. However, the most general form of such statements is known to be false. There are a number of known counterexamples, that is isospectral but not isometric manifolds. Indeed, there are even techniques to construct such counterexamples. Nonetheless, it is believed that almost all Riemannian manifolds can be identified by their spectra. In other words, the counterexamples are expected to be exceedingly rare special cases. This has been shown to be the case in some restricted classes of manifolds. The proof in the general case has remained elusive. The main goal of this thesis is to move towards such a proof by studying the structure of isospectral sets of metrics. The main tool we use for this purpose is perturbation theory, a method ubiquitous in physics, but strangely underused in spectral geometry. Consequently, a secondary goal of this work is to demonstrate the usefulness of perturbation theory to the study of spectral geometry. We begin by a numerical exploration of spectral geometry in a perturbative regime. Then, we show that sets of isospectral conformally equivalent metrics on boundaryless manifolds of dimension two contain no convex subsets. This is an entirely new type of result in spectral geometry. We argue that it could lead to a proof of the rarity of counterexamples in the program of identifying shapes by their spectra. The thesis also includes reviews of the fundamentals of the spectral theory of Laplace-type operators, of major results in spectral geometry and of perturbation theory.