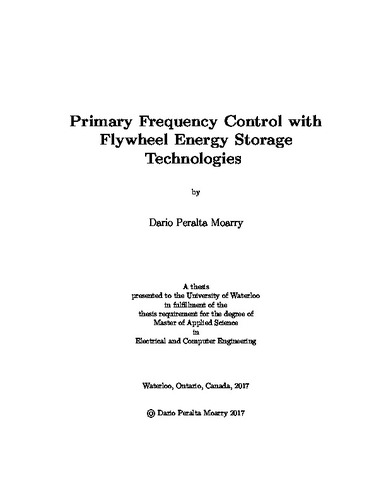 Over the last decade, concerns about greenhouse gas emissions have increased. Different strategies have been developed to minimize those effects, leading to the development of renewable energy sources worldwide. In recent years, the deployment of solar photovoltaic and wind energy-based renewable generation technologies have been growing at a fast pace. The penetration of these technologies into the power system network introduces new challenges for frequency and voltage stability because of the intermittency of these energy sources, and the increasing risk of significant voltage/frequency variations. The significant penetration of renewable sources requires fast regulation of the frequency deviations; hence, the implementation of primary frequency controls is necessary. There exists different techniques and strategies for primary frequency control, where governor regulation and under frequency load shedding are two of the best known, but these have several limitations regarding fast response. Thus, new control techniques based on energy storage systems, which are able to provide fast frequency control, are being studied. In this context, a flywheel energy storage (FES) system is studied and modeled in this thesis for frequency control in power systems, using the well-known software Dynamic Simulation Assessment Tool (DSATools)®, to allow researchers and practitioners to readily model FES in power system studies, particularly the Independent Electric System Operator (IESO) of Ontario. The proposed FES DSATools® model is tested and compared using a previously proposed test system with a large wind energy system (WES), which creates significant frequency and voltage fluctuations due to its characteristics. The FES stores and delivers energy to the power system, as required by the network, through a back-to-back power electronic converter system. A frequency/speed limiter controller is used, considering the network frequency deviation and the FES rotational speed in the active control of the flywheel-side converter for active power control of the flywheel. A static var compensator (SVC) for voltage control is also studied. The presented studies consider disturbances from sudden changes in the wind speed, which affect the WES output active power, creating considerable problems for the test system's stability. The simulation results suggest that the proposed FES model implemented on the system studied, provides effective primary frequency control, and it also improves the network voltage. Thus, the FES is shown to maintain system stability, increasing the operational efficiency of conventional and renewable generators.