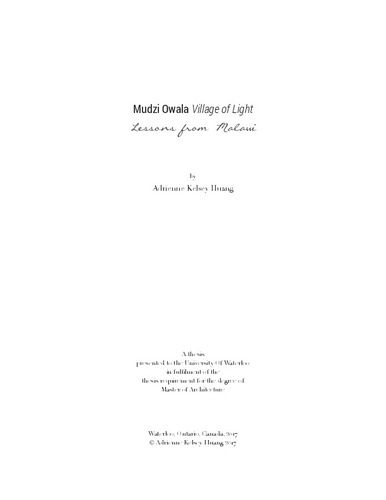 This thesis explores my journey to a small corner of Africa, where I lived with and learned from the communities of rural Malawi. In particular, it examines the architectural lessons that emerged from my involvement in a local building project called Mudzi Owala (Village of Light). My African travels were inspired by the realization that more than ninety percent of the total number of architects in the world live and work in the wealthiest countries, cities, and neighbourhoods. While most architectural schools focus on design studio-based education, the exemplified clients and projects account for less than ten percent of the population on a global scale. Over time, I have realized that my interest lies in working with those without access to standard architectural services – namely, the overwhelming majority of the population. In an era dominated by global challenges such as large-scale informal settlements, unsustainable development, and resource scarcity, the traditional role and training of the “desk architect” can be increasingly questioned. In the 21st century, the role of the architect demands the cultivation of many so-called non-architectural skills and experiences. The contrast between my traditional architectural education and the realities I witnessed in my adopted community led me to a new understanding of architecture that fundamentally changed my mindset about what it means to work as an architect. This thesis is a collection of architectural research, reflections, and responses shared as a series of lessons. Represented through personal narrative and photography, the result is an account of my travels in Malawi as a means of understanding how our approach to the role of the architect may change in order to be able to meet the challenges that define our new global reality.