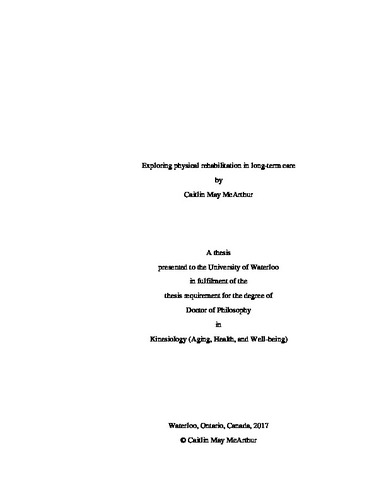 The aging population requiring residential support in long-term care (LTC) continues to grow, as does their need for multidisciplinary interventions including physical rehabilitation (PR). In tandem, quality of care in LTC has also been of increasing concern to researchers and the public. A controversial funding change in Ontario in 2013 has led to questions about the quality of rehabilitative care provided in LTC and the need for leadership in the PR in LTC sector. The objectives of the thesis were to: 1) To synthesize what is known about a) any tools to determine who should receive PR services; b) which PR services have been evaluated; and c) how they have been evaluated. 2) Using the results of objective 1 and stakeholder consultation to determine which facility-level quality indicators (QIs) could be used to evaluate PR in LTC; 3) To determine the relationship between PR and the QIs decided upon in objective 2; and 4) To evaluate the impact of the funding change in Ontario in 2013 using the QIs from objective 2. First, a structured scoping review synthesized a description of the PR interventions in LTC and the outcomes used to evaluate them. A consensus meeting using nominal group technique determined which domains of QIs could be used to evaluate PR in LTC. The third study evaluated the relationship between PR and the QIs identified in study two using multilevel modelling. Finally, the fourth study evaluated the effect of the funding change on the same QIs. The literature review revealed that intervention trials of PR in LTC are most commonly delivered and evaluated at the resident-level and assess performance-based measures, ADLs, and mood as outcomes. Few studies have used facility-level measures to evaluate rehabilitation. However, the consensus process determined that ADLs and falls should be used for evaluation, though exact specifications of an ADL QI could not be decided upon. Analysis of seven ADL and one falls QI revealed wide variation across four Canadian provinces, with no consistent relationship with the proportion of residents receiving rehabilitation services except for nursing rehabilitation programs in Alberta. The policy change in Ontario in 2013 saw fewer residents receiving physical therapy (PT) overall, but was associated with improved performance on several ADL QIs. However, not all relationships were positive. The proportion of residents receiving the no PT and the least time intense PT was associated with poorer performance on two of the ADL QIs after the policy change.