The Player and The Machine 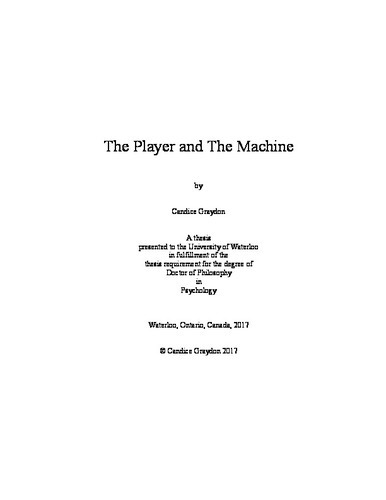 Modern multiline video slots are popular games with high fidelity sounds and salient graphics, which allow players to wager on multiple lines at once. Interestingly, on multiline slots, many small wins actually amount to less than one's spin wager (e.g., bet a dollar and win back a quarter). These outcomes, however, are accompanied by flashing lines and winning sounds, disguising the negative gains that they truly are. Dixon, Harrigan, Sandhu, Collins, and Fugelsang (2010) termed these outcomes losses disguised as wins, or LDWs. Research has shown that players physiologically (Dixon et al., 2010), behaviourally (e.g., Dixon, Graydon, Harrigan, Wojtowicz, Siu, and Fugelsang, 2014a), and verbally (e.g., Jensen et al., 2013) miscategorize LDWs as wins rather than correctly categorizing LDWs as losses. We have also shown that LDWs lead players to overestimate how often they won during a playing session (e.g., Jensen et al., 2013), leading to what we referred to as a LDW-triggered win overestimation effect. In Chapter 2, we showed that a short educational animation could lead players to correctly categorize LDWs as losses, thus eliminating the LDW-triggered win-overestimation effect. In Chapter 3, using resistance to extinction paradigms, we showed that LDWs could behaviourally reinforce players, leading them to continue to gamble despite financial loss. In Chapter 4, we showed that LDWs could affect players' game preferences and game selection, leading them to choose games with LDWs over games without LDWs. We discuss that these results are disconcerting, because players choose games with reinforcing negative gains, which could lead to distorted memory of how much they won or lost, potentially leading to increased gambling despite financial loss - a hallmark of problem gambling. Finally we discuss future research on LDWs.