Multi-stressor impacts on fish energetics and stress response: a comparison between lab and field studies 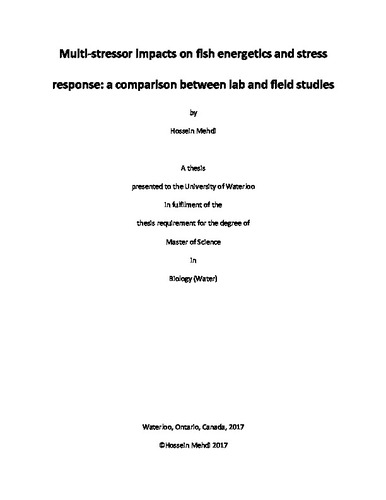 Aquatic organisms are continuously exposed to multiple environmental stressors that work cumulatively and synergistically to alter ecosystems. The objective of this study was to investigate the impacts of multiple stressors under lab and field conditions using two fish species, zebrafish (Danio rerio) and rainbow darter (Etheostoma caeruleum). Under lab conditions, the study examined the impacts of chronic exposure to environmentally relevant concentrations of venlafaxine and elevated water temperatures on the energetics and stress response of zebrafish. Venlafaxine is a frequently prescribed antidepressant that is readily detectable in many Canadian waterways that receive discharged wastewater treatment plant effluent. Under field conditions, rainbow darter were collected upstream and downstream of the Waterloo wastewater treatment plant in the Grand River, Ontario, Canada. Enzyme activities of major metabolic and mitochondrial enzymes were measured in muscle tissue of both species. Oxygen consumption was measured to assess the effects of stressors on routine metabolic rate, active metabolic rate, aerobic scope, and critical swimming speed, all of which are significant indicators of fishes performance in ecological frameworks. Finally, the impact of chronic exposure to multiple stressors on the cortisol stress response following confinement and air-exposures stressors was investigated in zebrafish and rainbow darter respectively. In the lab study, it was found that fish exposed to multiple stressors had higher oxygen consumption rates, resulting in diminished aerobic scope. No impairment in the cortisol stress response was observed in response to either stressors, singularly or cumulatively. Exposure to multiple stressors also had an impact on the enzyme activities in the muscle tissue of zebrafish. Fish exposed to multiple stressors had higher pyruvate kinase activity, reduced 3-hydroxyacyl CoA dehydrogenase temperature sensitivity, and lower catalase activity in response to the higher exposure temperature. In the field study, it was found that male and female rainbow darter collected downstream of the Waterloo wastewater treatment plant had higher oxygen consumption rates. No impairment in the cortisol stress response between the downstream and upstream fish was observed, however, baseline cortisol levels in female fish from the downstream site were significantly higher compared to other baseline groups. Elevated cortisol levels were also higher in female fish from both sites when compared to their male counterparts. Differences in enzyme activities measured in the muscle tissue of rainbow darter were detected, however, differences were mostly associated with sex rather than collection site. The results suggest that multi-stressor research can yield unexpected data that might not have been predicted using conventional single-stressor approach. Aligning field and lab results will highlight the importance of including multi-stressor approach assessments in making predictions regarding the impact of environmental stressors on non-target organisms.