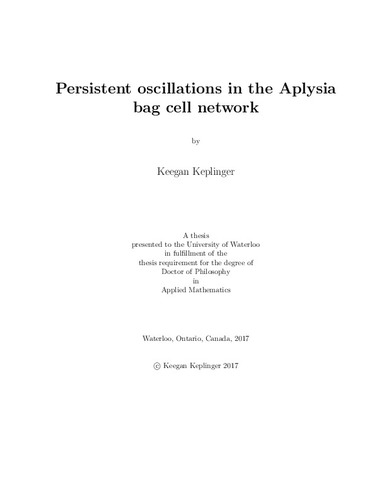 Persistence is a phenomena by which a resting neuron enters a state of persistent behavior following a brief stimulus. Persistent neural systems can exhibit long-term responses that remain after the stimulus is removed, switching from excitable, steady-state dynamics to a period of tonic spiking or bursting. In Aplysia, such behavior, known as the afterdischarge, is exhibited by the bag cell neuron and regulated by second messenger calcium dynamics. In this thesis, we construct a model for the electrical activity of the Aplysia bag cell neuron is constructed based on experimental data. The model includes many features of the bag cell, including use-dependence, non-selective cation channels, a persistent calcium current, and the afterdischarge. Each of these features contributes to the onset of afterdischarge. Several methods are used to ﬁt experimental data and construct the model, including hand tuning, parameter forcing, genetic algorithms for optimization, and continuation analysis. These methods help to address common modeling issues such as degeneracy and sensitivity. Use-dependence in the calcium channels of Aplysia is thought to depend on calcium. The model developed in this thesis veriﬁes calcium as a viable driver for use-dependence. The literature often emphasizes two potassium channels in the context of bag cell afterdischarge, but we show that afterdischarge behavior is produced with only a single potassium channel in simulations. Experimental evidence suggests that nonselective cation channels are a primary driver of afterdischarge behavior. In the model developed here, the nonselective current is required for in silica afterdischarge to take place. Continuation analysis is used to determine and tune the location and stability of ﬁxed points in the model. For exploratory analysis, an electrically-coupled network model is constructed to simulate the observed dynamics in bag cell clusters in vivo. A simple two-neuron network reproduces some experimental results. Larger networks are considered. Little is known about the topology of Aplysia bag cell cluster. The ﬁnal chapter of this thesis explores diﬀerent topologies in a 100-neuron network, including a ring topology, a cluster ring topology, and a randomly-connected scatter network, exploring how the coupling constant, topology, and size of the network aﬀect the ability of the network to synchronize.