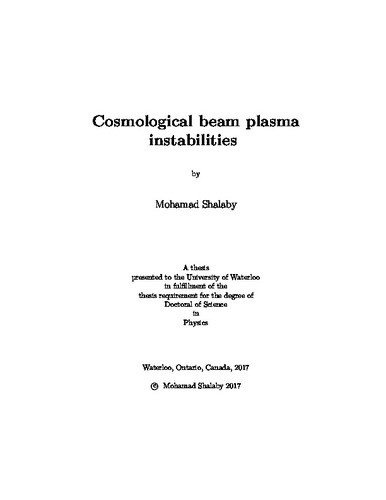 Blazars are the main source of extragalactic very high energy gamma-rays. These gamma rays annihilate on the extragalactic background light, producing electron-positron pair beams with TeV energies. The pair beams are very dilute, with beam-IGM density ratio of $\alpha \sim 10^{-15}$, ultra-relativistic, $\gamma \sim 10^6$, and energetically subdominant ($\gamma \alpha \sim 10^{-9}$). Such pair beams suffer from prevailing cosmological scale, linear beam-plasma instabilities. The associated instability growth rates suggest that at least initially these overwhelmingly dominate inverse Compton cooling, currently the only alternative mechanism by which the pair beams lose energy. Therefore, the full non-linear evolution of the instabilities is key to determining the mechanism by which these pair-beams lose their energy. Kinetic numerical simulations are the only method by which we can currently study the full non-linear evolution of the blazar-induced beam-plasma instabilities. However, the extreme parameters of the pair beams make direct simulations via existing particle-in-cell (PIC) codes infeasible. To address this, we developed a new Spatially Higher-order Accurate, Relativistic PIC algorithm (SHARP). A one dimensional implementation of the SHARP algorithm (SHARP-1D) is given in detail. We show explicitly that SHARP-1D can overcome a number of the limitations of existing PIC algorithms. Using SHARP-1D, we demonstrate a number of points that are important to correctly simulate the full evolution of beam-plasma instabilities. We show that convergence for PIC algorithms requires increasing both spatial resolution and the number of particles per cell concurrently. For a beam-plasma system, we show that the spectral resolution is another important resolution criteria and under-resolved simulations can lead to erroneous physical conclusions. We quantify the required box sizes to faithfully resolve the spectral support of the instabilities. When the background plasmas contain structure, we show that a significant fraction of beam energy (similar to that in uniform plasma simulations; $\sim 20$\%) is, still, lost during the linear evolution of the electrostatic unstable modes. Compared to uniform plasma growth rates, we find lower growth rates, however, the non-uniform systems stay longer in the linear regime. Therefore, the IGM inhomogeneities are unlikely to affect the efficiency of beam-plasma instabilities to cool the blazar-induced pair beams.