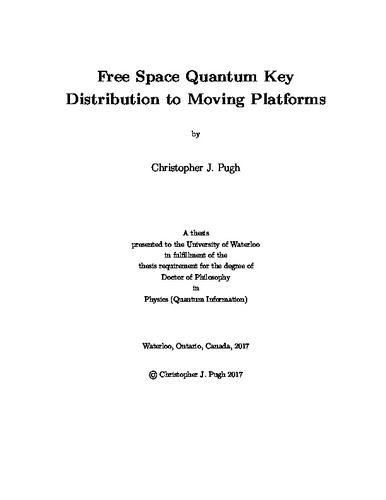 The quantum space age has officially begun and many important milestones and achievements have recently been demonstrated, such as the exciting launch and results of the first quantum demonstration satellite, Micius. Previously with terrestrial applications, quantum key distribution was limited in distance to a few hundred kilometers through either free space or optical fiber. This had dampened progress towards a global quantum cryptographic network, but with the recent progress towards space implemented quantum systems, the door has been opened once again. In this thesis, we begin by studying the effect of using an adaptive optics system to improve the efficiency of a free space link to a satellite for quantum key distribution. Adaptive optics has been used extensively in astronomy and has the potential to increase the average optical intensity received by the satellite. We study the effect of the atmosphere on the beam as it propagates from the ground station to the satellite. In the up-link configuration, the atmosphere is of special concern as it affects the beam at the beginning of the propagation, making the end effect worse. One of the important components of a free space quantum key distribution satellite system is a fine pointing unit. We have, along with industry partners, designed and implemented such a unit for free space optical links. The device was designed to have little to no effect on the polarization of the photons used to transmit the key bits. The device was tested, both in the laboratory and outside and quantum key distribution was successfully performed while the fine pointing was active. The main experiment of the thesis demonstrates quantum key distribution to a moving airplane from a ground station. The components of a quantum key distribution receiver prototype were tested locally around the University of Waterloo campus as well as some tests using private airplanes. The collaboration with the National Research Council of Canada really allowed the project to take flight by granting us access to a research aircraft to deploy our receiver prototype. This project spanned over three years and culminated in a two week flight campaign out of Ottawa and Smiths Falls Ontario. Using only five flight hours we were able to successfully transmit finite size quantum secure keys from our optical ground station, located at Smiths Falls--Montague Airport to a Twin Otter Research Aircraft housing our quantum key distribution receiver prototype. Many of the components implemented in the receiver were designed and built with spaceflight in mind and have a clear path to flight for space application. Finally, we study the feasibility of implementing a quantum key distribution receiver onto a nano satellite. In partnership with the University of Toronto Institute for Aerospace Studies Space Flight Laboratory, we studied the various aspects such as optics, detection, cooling, power, mass, etc., to determine if it would be possible to perform quantum key distribution to a nano satellite. The main difference of this project from the previous Quantum Encryption and Science Satellite is the simpler pointing system, which doesn't utilize fine pointing. Through various studies, experiments, and component design, we have shown the feasibility of implementing quantum key distribution to a moving aircraft in an up-link configuration. This work contributes to the long line of achievements leading towards satellite implementations of quantum key distribution for eventual global quantum cryptography.