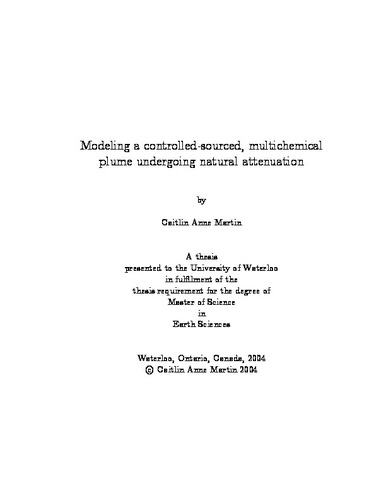 Sampling of an emplaced creosote source installed below the water table at CFB Borden was conducted over a period of ten years, with over nine thousand samples taken from approximately 250 multilevel samplers. This extensive dataset was used in several attempts to model the multi-chemical plumes emanating from this emplaced source, and to further understand the chemical and biological processes affecting these plumes and their natural attenuation. An aerobic microcosm study of naphthalene, 1-methylnaphthalene and acenaphthene was conducted in order to determine the possibility of interactions between these three chemicals. All three chemicals degraded within the eight days of the study, and the degradation of naphthalene and 1-methylnaphthalene was not affected by the presence of any of the three chemicals studied. Acenaphthene degraded more quickly when naphthalene was present in the microcosm. The programs Visual MODFLOW and RT3D were used to model the transport and degradation of naphthalene at CFB Borden. Both a first order rate reaction module and a multiple electron acceptor reaction module were used, and contaminant mass was introduced to the model through a fence of observed concentrations. Good results were found at early time with the multiple electron acceptor reaction package, however at late time the model did not match to observations. The program BIONAPL/3D was used in a similar attempt to model the transport and degradation of naphthalene. Naphthalene mass was introduced to the model through a fence of observed concentrations, and multiple electron acceptors were used to degrade this chemical. Results were good at early time, but at late time the model did not match observations. BIONAPL was then used to simulate the dissolution of the original source NAPL. Several chemicals of interest were examined: naphthalene, m-xylene, 1-methylnaphthalene and acenaphthene. Naphthalene and m-xylene dissolved from the source at rates similar to observations, however the dissolution of 1-methylnaphthalene and acenaphthene was not as well modeled. As with the Visual MODFLOW model, the BIONAPL model which best matched observations generally worked well at early times, but did not at late times. The models were not able to successfully simulate many processes that occur in the field, such as chemical and biological interactions and NAPL source dissolution. Mismatches between the models and observations are likely due to these reasons. It may be that we do not fully understand these processes, so we are unable to model them.