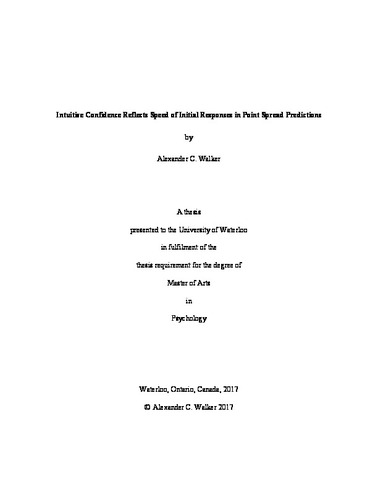 Previous research has revealed that intuitive confidence is an important predictor of how people choose between intuitive and non-intuitive alternatives. Two studies were conducted to investigate the determinants of intuitive confidence. Across these studies participants predicted the outcomes of several National Basketball Association games, both with and without reference to a point spread. As predicted, after controlling for the variability associated with point spread magnitude, the faster participants were to predict the outright winner of a game (i.e., generate an intuition), the more likely participants were to predict the favourite against the point spread (i.e., endorse the intuition). Overall, my findings point to the speed of intuition generation as a determinant of intuitive confidence, and thus a predictor of choice in situations featuring intuitive and non-intuitive alternatives.