"Free" to Express: Media Rights and Broadcasting Policy in Canada and the United States 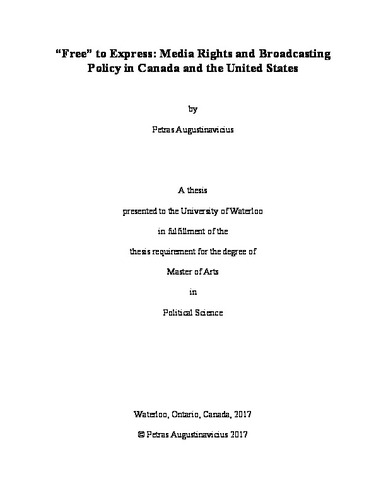 Broadcasters occupy a unique space in Canadian and American societies. These actors are supposed to be able to inform, enlighten, and entertain Canadians and Americans alike. Moreover, both the Canadian Charter of Rights and Freedoms and the American Bill of Rights contain freedom of the press and freedom of expression provisions which appear as though they ought to protect broadcasters as well. In this thesis I explore how robust these protections are, and the extent to which Canadian and American appellate courts have been willing to empower these actors. To do this, I developed a typology for quantitatively evaluating the judicial empowerment of broadcasters in each country. What I found was that the United States Supreme Court has been more willing to empower broadcasters than the Canadian appellate courts have. This is evidenced by the rate at which American broadcasters have been empowered when compared with Canadian broadcasters. My quantitative findings are further supported by a content analysis of appellate level decisions in Canada and the United States. This thesis also seeks to draw a connection between the current understanding of media rights and the implications that understanding has for the new era of broadcasting in which digital and internet- based media have revolutionized broadcasting.