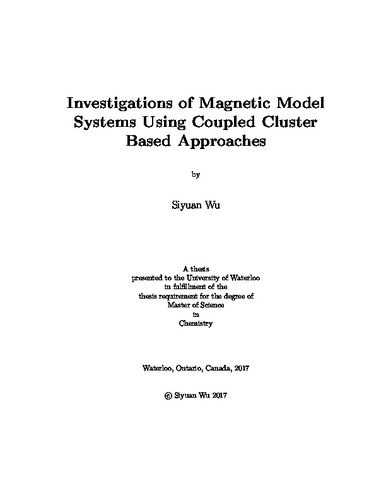 Over the past decades, the quantum mechanical description of magnetic phenomena has been well developed. However, the first principle calculations of the physical properties of magnetic systems is still a challenge. One solution to the problem is to construct model magnetic Hamiltonians such that these Hamiltonians can well describe accurate energies of the low-lying magnetic states, starting from an ab initio Hamiltonian in a finite atomic orbital basis set. In the first part of this work, the multireference equation of motion coupled cluster (MREOM-CC) approach including spin-orbit coupling is applied to model magnetic systems FArO, FArOF and FArFOH. All low-lying magnetic states are obtained subsequently from a compact diagonalization of the transformed Hamiltonian in the MREOM-CC scheme. The accuracy of MREOM is shown to be comparable to the well-established multireference Configuration Interaction with singles and doubles and the Davidson Q correction (MRCISD+Q), but the MREOM approach is significantly more efficient for systems with a large number of electronic states. In the second part, we discuss the details of the effective Hamiltonian approach, proposed in this work. The purpose of this approach is to obtain low-lying states for a Hamiltonian that consists of pairwise interactions between magnetic sites only. The approach includes two steps: the definition of an effective Hamiltonian that acts in a compact space of low-lying single-site states obtained from a mean-field calculation, and the diagonalization of the effective Hamiltonian. The last step still limits the size of systems that can be tackled. Some variants of the effective Hamiltonian approach are tested in benchmark applications to model magnetic systems. The results indicate that this approach is promising, and finally we briefly discuss how this approach can be improved in the near future.