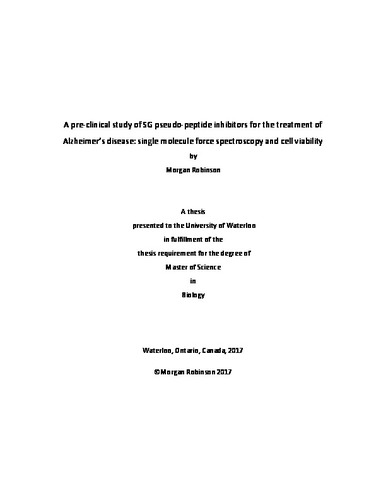 Alzheimer's disease (AD) is one of the single greatest healthcare challenges facing our society today with no treatments available that cure, prevent or slow the disease. Neurodegeneration in AD is observed alongside pathology featuring amyloid-β (Aβ) deposits in the brain. Aβ monomers themselves have minimal toxicity but misfold into β-sheets and aggregate to form neurotoxic soluble oligomers, than aggregate further into less toxic insoluble fibrils and plaques. To treat or prevent AD one potential strategy has been suggested which involves the use of rationally designed pseudopeptides that bind Aβ with high affinity, inhibit aggregation into toxic Aβ oligomers and allow for natural clearance. A class of pseudopeptide Aβ inhibitors, designated “SG”, have been proposed with the use of computer aided drug design (CADD) by medicinal chemists at the University of Calgary led by Dr. Arvi Rauk. It is the aim of this thesis to verify, experimentally, that SG inhibitors behave as expected, moving these potential AD drug candidates further along the drug development pipeline. In this thesis a brief overview of Aβ pathology and therapeutics directed against Aβ are discussed followed by a review of the literature relevant to SG inhibitor design. The results from two separate experiments evaluating SG inhibitor target engagement and neuroprotection against Aβ are then discussed. In the first experiment, a nanoscale biophysics approach was used to assess the ability of SG inhibitors to bind Aβ and prevent dimerization – the first step in toxic oligomer formation. This single-molecule biophysics assay built on an atomic force microscopy (AFM) platform demonstrated that all the inhibitors engage the target and prevent Aβ dimerization. In the second set of experiments, a series of in vitro cell viability studies with HT-22 murine derived hippocampal cells was performed to assess SG inhibitor toxicity and the ability of SG inhibitor to mitigate Aβ toxicity. Most SG inhibitors exhibited no apparent toxicity to HT-22 cells however myristic acid modification for delivery of inhibitors to the brain caused dose dependent toxicity. Importantly, two of the five inhibitors demonstrated a small but promising effect on preventing Aβ oligomer neurotoxicity as demonstrated by one third increase of HT-22 cell viability in MTT assays. The inhibitor SGA1 may cause a slight increase in the toxicity of Aβ prepared under fibril forming conditions. Overall the work described here presents experimental evidence that indicates SG inhibitors as a potential therapeutic for Aβ toxicity and informs recommendations for SG inhibitor design to improve safety and efficacy for future lead candidates.