A Human Motor Control Framework based on Muscle Synergies 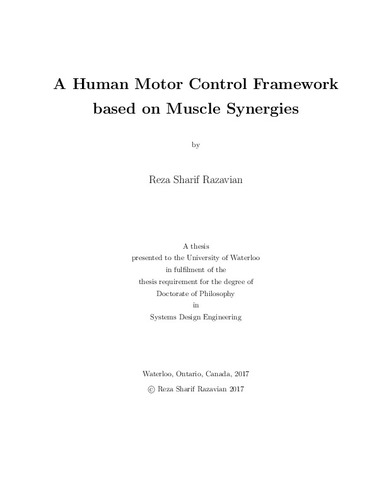 In spite of the complexities of the human musculoskeletal system, the central nervous system has the ability to orchestrate difficult motor tasks. Many researchers have tried to understand how the human nervous system works. Yet, our knowledge about the integration of sensory information and motor control is incomplete. This thesis presents a mathematical motor control framework that is developed to give the scientific community a biologically-plausible feedback controller for fast and efficient control of musculoskeletal systems. This motor control framework can be applied to musculoskeletal systems of various complexities, which makes it a viable tool for many predictive musculoskeletal simulations, assistive device design and control, and general motor control studies. The most important feature of this real-time motor control framework is its emphasis on the intended task. In this framework, a task is distinguished by the kinematic variables that need to be controlled. For example, in a reaching task, the task variables are the position of the hand (individual joint angles are irrelevant to the reaching task). Consequently, the task space is defined as the subspace that is formed by all the controlled variables. This motor control framework employs a hierarchical structure to speed up the calculations while maintaining high control efficiency. In this framework, there is a high-level controller, which deals with path planning and error compensation in the task space. The output of this task space controller is the acceleration vector in the task space, which needs to be fulfilled by muscle activities. The fast and efficient transformation of the task space accelerations to muscle activities in real-time is a main contribution of this research. Instead of using optimization to solve for the muscle activations (the usual practice in the past), this acceleration-to-activation (A2A) mapping uses muscle synergies to keep the computations simple enough to be real-time implementable. This A2A mapping takes advantage of the known effect of muscle synergies in the task space, thereby reducing the optimization problem to a vector decomposition problem. To make the result of the A2A mapping more efficient, the novel concept of posture-dependent synergies is introduced. The validity of the assumptions and the performance of the motor control framework are assessed using experimental trials. The experimental results show that the motor control framework can reconstruct the measured muscle activities only using the task-related kinematic/dynamic information. The application of the motor control framework to feedback motion control of musculoskeletal systems is also presented in this thesis. The framework is applied to musculoskeletal systems of various complexities (up to four-degree-of-freedom systems with 15 muscles) to show its effectiveness and generalizability to different dimensions. The control of functional electrical stimulation (FES) is another important application of my motor control framework. In FES, the muscles are activated by external electrical pulses to generate force, and consequently motion in paralysed limbs. There exists no feedback FES controller of upper extremity movements in the literature. The proposed motor control model is the first feedback FES controller that can be used for the control of reaching movements to arbitrary targets. Experimental results show that the motor control model is fast enough and accurate enough to be used as a practical motion controller for FES systems. Using such a biologically-plausible motor control model, it is possible to control the motion of a patient's arm (for example a stroke survivor) in a natural way, to accelerate recovery and improve the patient's quality of life.