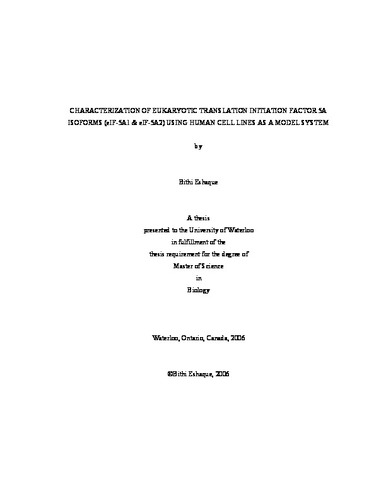 Eukaryotic translation initiation factor 5A (eIF-5A) is the only known cellular protein that contains the post-translationally derived amino acid, hypusine. Initially, eIF-5A was named as a translation initiation factor because of its capability to stimulate the formation of methionyl-puromycin, which mimics the first peptide bond formation during protein synthesis, under <em>in vitro</em> conditions. Subsequently, however, this proposed function of eIF-5A has been questioned because a similar effect on translation was not observed <em>in situ</em>. Moreover, eIF-5A appears not to be required for general protein synthesis. Rather, there is evidence that it facilitates the translation of specific subsets of mRNAs required for cell proliferation as well as apoptosis. <br /><br /> There are two isoforms of eIF-5A in the human genome which have designated eIF-5A1 and eIF-5A2. The objective of the present study was to gain an increased understanding of the roles of eIF-5A1 and eIF-5A2 during apoptosis and cell proliferation using human cell lines as a model system. Apoptosis was induced by treating the cells with Actinomycin D or sodium nitroprusside (SNP), which initiate programmed cell death by different mechanisms. It was observed for both normal and cancer cells that eIF-5A1 protein is up-regulated during apoptosis induced by Actinomycin D or SNP, whereas eIF-5A1 mRNA is constitutively expressed and does not change in abundance during this treatment. The up regulation of eIF-5A1 protein levels in the absence of a corresponding up-regulation in eIF-5A1 mRNA suggests that eIF-5A1 may be post-transcriptionally regulated. Moreover, eIF-5A1 protein up-regulation was stronger in normal cells than in cancer cells. By contrast, eIF-5A2 protein was below detection levels during apoptosis in both normal and cancer cells, although the corresponding transcript was detectable by semi-quantitative RT-PCR. This is attributable to inefficient translation of eIF-5A2 mRNA. <br /><br /> The effects of eIF-5A1 and eIF-5A2 on cell proliferation were examined by modulating the levels of serum in cultures of UACC-1598 cells, which are ovarian cancer cells that express high levels of both isoforms of eIF-5A. Serum starvation, which induces cell cycle arrest and ensuing apoptosis, followed by the re-addition of serum had no effect on the transcript levels of either eIF-5A1 or eIF-5A2. However, eIF-5A1 and eIF-5A2 proteins were both up-regulated within 24 hours of the initiation of serum starvation, and this coincided temporally with the onset of apoptosis as measured by TUNEL and a subsequent decline in viable cells. <br /><br /> The data indicate that eIF-5A1 and eIF-5A2 are both post-transcriptionally regulated and that they have functionally redundant roles in apoptosis.