Calendar Aging and Lifetimes of LiFePO4 Batteries and Considerations for Repurposing 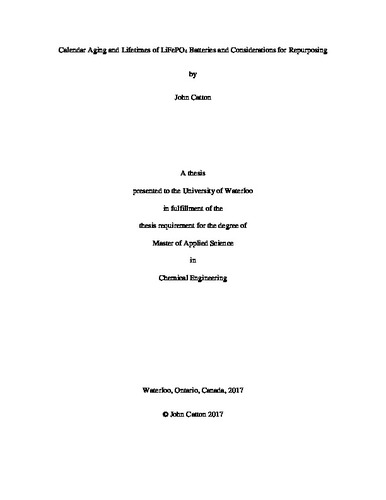 In response to rising petroleum prices, the demand for lower emissions standards for vehicles, and better vehicle fuel economy, the market for hybrid and electric vehicles is expanding. These systems incorporate advanced battery systems which store and provide energy in the vehicle. Over time, though, cells degrade and lose capacity in accordance with two different aging phenomena: cycling and calendar aging. It is imperative to understand how these degradation phenomena occur as the loss in capacity results in a loss in vehicle range. Through understanding how these phenomena occur, mitigation efforts can be designed to prevent or lessen their effects. This thesis will focus primarily on studying the effects of calendar aging on commercial LiFePO4 cells. Cells are aged at varying temperatures and states of charge (SOC) to determine the extent of capacity fade and degradation. Additional testing methods are then utilized to attempt to determine which aging phenomena are promoting the losses within the cell. Capacity loss in cells stored at high temperature and fully charged conditions resulted in faster degradation rates. Temperature had the most significant role in the degradation of the cell and then the cell’s SOC. Comparing capacity losses between cells stored at the same temperature, but with different SOCs, found that the cells with higher SOC experienced increased rates of degradation in comparison to their fully discharged counterparts. In addition, storage at high SOC and high temperatures promoted such severe losses that the cells in question were unable to recapture capacity that they had lost reversibly. The primary degradation mode for the cells was the loss of cyclable lithium, and was found to occur under all of the storage conditions. Cells stored at much more severe conditions, though, also demonstrated a loss of active material at the anode. The extent of the loss of the active material was largely predicated on whether or not the cell was stored at fully charged or discharged conditions. Storage of lithium-ion batteries at high temperatures has a dramatic effect on the continual usage of the cells after storage conditions have changed. Despite shifting temperatures or states-of-charge to a lower value, the initial storage conditions leads to increased degradation rates throughout the cell life. Thus, the history of storage for the cell must be also be taken into account when considering losses in capacity.