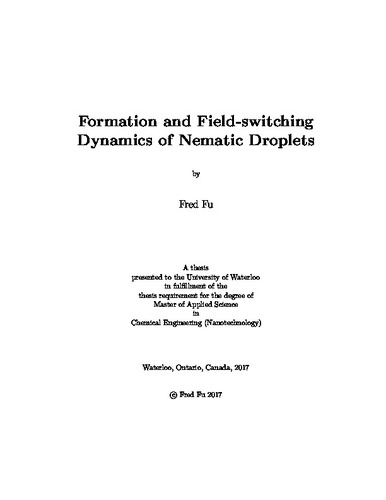 Liquid crystals (LCs) refer to a class of materials which have anisotropic properties. They are used in many technological applications ranging from displays to biological sensors. One example of a category of technologically relevant LC applications is optical functional materials, which include polymer-dispersed liquid crystal (PDLC) films. In these films, non-deformable micron-scale LC droplets are dispersed in a solid polymer matrix. Application of an electric field through the thickness of a PDLC film results in "switching" between a transparent "on" state (field-on) and a translucent "off" state (field-off). Thus the main application of these films are as switchable windows. Key to this mechanism is the ability for external fields to reorient the direction LC molecules within the droplets. In this work, the LC phase formation and external electric field-switching dynamics of orientationally-ordered LC droplets are studied using the continuum Landau--de Gennes model. The model is able to capture phase transition and reorientation dynamics on device-relevant length and time scales when combined with numerical methods such as the finite element method. Formation dynamics correspond to transitioning from a high-temperature disordered liquid phase to an orientationally-ordered phase referred to as a nematic LC. Field-switching dynamics correspond to the imposition and release of an external (electric) field. Particular emphasis is placed on non-spherical droplets, which may form naturally or intentionally under controlled conditions in the manufacturing of PDLC films. The interactions between shape, LC/polymer interfacial effects, electric field strength, and other parameters are first investigated for capillary geometries using a simplified model, which is then followed by fully three-dimensional droplet simulations. Finally, simulation results predicting a symmetry-breaking phase transformation process for spherical droplet domain are presented. This observation is found to be predicted when using physically-realistic material parameters approximating the LC compound pentyl-cyanobiphenyl (5CB), but not for simulations with a typical simplification of nematic elasticity known as the single elastic constant approximation.