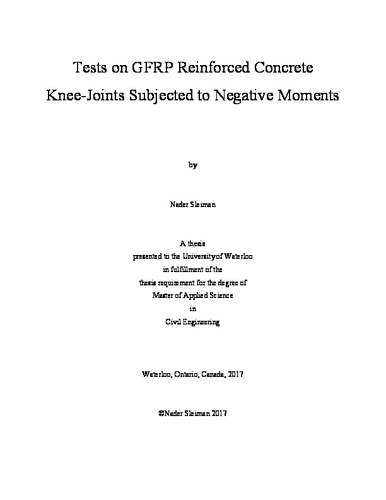 The use of glass-fibre reinforced polymers as main reinforcement in concrete structures has become an appealing option for structures in aggressive environments. Concrete knee-joints are joints where the beam and column both terminate at the joint. The application GFRP reinforcement in knee-joints may be problematic considering the weak link at the reinforcement bend. This is critical because there is a risk of premature failure in the joint due to bar rupture, regardless of adjoining member designs. The behaviour of knee-joints reinforced with GFRP has not been studied before. The presented experimental program consists of eight full scale specimens which were tested under monotonic closing loads. The variables studied are the effect of varying reinforcement ratio, the effect of confinement stirrups in the joint, and the effect of corner geometry. The eight specimens are divided into two groups, confined and unconfined specimens. Of the eight specimens, two are designed with an altered geometry to include an interior chamfer. Test results indicate that an increase in reinforcement ratio improves the strength efficiency while directly altering the failure mode: Failure by bar rupture as the reinforcement ratio increased was prevented and occurred by failure of diagonal strut. The addition of confinement stirrups significantly increased the ultimate strength as well as the maximum deflection. The effect of changing corner geometry has a minor effect on the specimen strength; however, brittle failure in the joint was prevented. Further studies must be conducted including different confinement techniques, different FRP types and suppliers, as well as different loading types such as opening moments and load reversals.