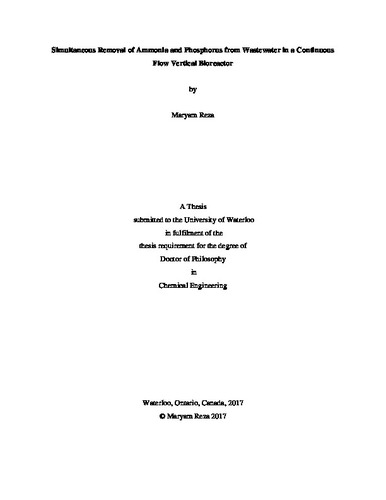 The objective of this PhD thesis was to study, develop and analyze an effective bioreactor and biological process to simultaneously remove nitrogen and phosphorus compounds from wastewater with minimum requirements for energy and footprint. A novel biological nutrient removal process was developed in a vertically configured pilot-scale bioreactor. The bioreactor set-up and its biological process were undertaken in the Water Technologies Laboratory at Ryerson University from November 2012 to December 2013. The bioreactor consisted of three consecutive vertical stages including Anoxic 1, Anoxic 2 and Aerobic stages. The reactor was aligned with an Anaerobic Lateral Unit (ALU) which provided a strict anaerobic condition to cultivate and promote the growth of phosphorus accumulating organisms (PAOs). The unique features of the bioreactor are the foundations for development of a simultaneous nitrification-denitrification-biological phosphorus removal process (SNDP). This thesis reveals that SNDP is the main pathway for the removal of ammonia, nitrate, nitrite and phosphorus. The SNDP process shows high level of nitrogen and phosphorus compounds removal with over 95% phosphorous and nitrogen removal efficiencies during one (1) year of laboratory operations. The co-existence of microorganisms in the SNDP process was highly influenced by the actions of all three redox conditions, 1) anaerobic, 2) anoxic, and 3) aerobic zones. The redox variations were influenced by the bioreactor configuration, HRTs, SRTs and nutrient concentrations. The biomass samples from the bioreactor were studied rigorously using advanced molecular biology techniques such as genomic sequencing. Microbial structure, diversity and interactions in the SNDP were studied in details. The results obtained in this work proved the presence of a new genus of microorganism known as Saprospiracae which occupied more than 67% of the biomass in the Anoxic stages and 48% of the biomass in the Aerobic stage of the bioreactor. The second largest group belonged to the genus of Zoogloea with over 11% and 36% in the Anoxic and Aerobic stages respectively. The vertical continuous flow bioreactor developed and operated in this research created a unique habitat for the growth of these microorganisms. To optimize the SNDP process, a series of experiments were performed on the bioreactor by varying three important parameters including: 1) Dissolved Oxygen (DO) concentration in the Aerobic stage ranging from 0-0.5 to 5.5-6 mg/L; 2) COD concentration in the Anaerobic stage ranging from 1000 to 1400 mg/L and, 3) NH3-N concentration in the inlet ranging from 49 to 120 mg/L. The experimental results showed that DO in the range of 2.5-3 mg/L were the optimum concentration for the SNDP process. The COD concentrations fed to the ALU could be lowered to 1000mg/L at SRT of approximately 50 days. Moreover, the intracellular PHAs in the biomass was found to be a great asset for the SNDP process as COD addition to the ALU could be lowered from 1400 mg/L to 1000 mg/L without having any negative impact on the process. The inlet NH3-N concentration of 49 mg/L was found to be the optimum level for the SNDP process. Biological phosphorus uptake was negatively affected when NH3-N concentration in the inlet was increased from 49 mg/L to 120 mg/L. The negative effects of high NH3-N were likely caused by increase in NO2- concentration and accumulation in the bioreactor which inhibited the activities of the PAOs. Both the SNDP process developed in this research and the vertical continuous flow bioreactor are innovations in the area of water/wastewater treatment. Indeed, the microbial distributions in anoxic and aerobic environment have not been found in any laboratory scale nor large scale BNR plant to date.