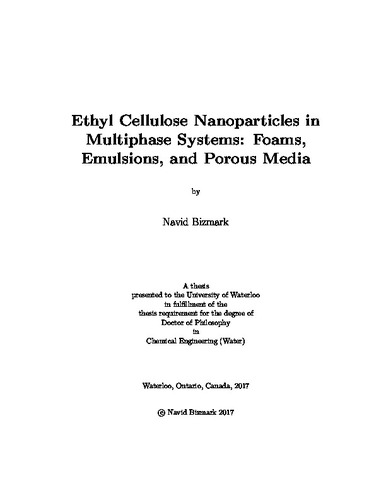 Adsorption-mediated self-assembly of ethyl cellulose (EC) nanoparticles at fluid interfaces, driven by reduction in interfacial energy, is shown to lead to stabilization of emulsions and foams. A multiscale approach is followed to address a number of fundamental and practical questions for application of EC nanoparticles in multiphase flows through porous media. At the nanoscale, the effects of pair interactions between EC nanoparticles suspended in water, between an EC nanoparticle and a fluid interface (oil-water or air-water), and between EC nanoparticles adsorbed at a fluid interface are studied by extended-DLVO computations and dynamic surface (interfacial) tension measurements with emphasis on - the dependence of colloidal suspension stability on ionic strength - the kinetics of nanoparticle adsorption at the air-water and alkane-water interfaces - the nature and extent of coverage of fluid interfaces by nanoparticles In the absence of salt, EC nanoparticle suspensions are stable at neutral pH as a result of electrostatic repulsion, but colloidal stability is lost by the addition of salt at or beyond a concentration of 0.05 M (the critical coagulation concentration or CCC). Regardless of ionic strength, however, hydrophobic attraction dominates the interactions between EC nanoparticles and fluid interfaces, resulting in barrier-less irreversible adsorption at both the air-water and alkane-water interfaces. Ionic strength is also found to have insignificant effect on the coverage of either kind of interface at steady-state, which approaches the jamming limit of 91% corresponding to a tight hexagonal packing for any value of the ionic strength in the range of 0 M to 0.1 M. Nonetheless, subtle effects of the ionic strength are observed on the rate of approach to steady state, during the later stages of adsorption, which is accelerated by the addition of salt in the case of the alkane-water interface, but apparently unaffected in the case of the air-water interface. Above the CCC, alkane-water and air-water interfaces behave similarly, in that the approach to steady state is decelerated as a result of increased surface blocking and competition for adsorbing species between coagulation in the bulk and attachment at the interface. These findings lead to new insights into the way in which EC nanoparticles stabilize emulsions and foams. The extent to which EC nanoparticles may be used to stabilize so-called Pickering emulsions is investigated as a function of phase volume ratio, ionic strength and nanoparticle concentration. Both oil-in-water (O/W) and water-in-oil (W/O) Pickering emulsions are observed, their stability is quantified and explained theoretically. The most stable O/W Pickering emulsion is obtained at an ionic strength slightly below the CCC with at least 70% volume fraction for the internal phase, an observation which opens the path for the utilization of EC nanoparticles as stabilizers of high internal phase Pickering emulsions (HIPPE). Such a HIPPE is shown to act as a template to fabricate a polymeric porous material made of EC. This material is demonstrated to selectively adsorb oil from the surface of water, suggesting potential applications in the field of oil-water separations. In line with theoretical expectation, flow and transport tests in transparent glass micromodels demonstrate that EC nanoparticles in stable colloidal suspensions (i.e., below CCC) move through silica-based porous media as a conservative tracer (e.g. NaCl). The convection-dispersion equation adequately describes this process with transport parameter (dispersivity and dispersion coefficient) values which agree with established models. Above the CCC convection accelerates the coagulation of EC nanoparticles, resulting in very rapid clogging of the porous medium and effective filtration of the nanoparticles. Lastly, it is demonstrated that foam can be generated in situ during the co-injection of gas and EC nanoparticle suspensions in glass micromodels, suggesting the possibility to engineer new foam flooding technologies for the recovery of hydrocarbons from subsurface porous media.