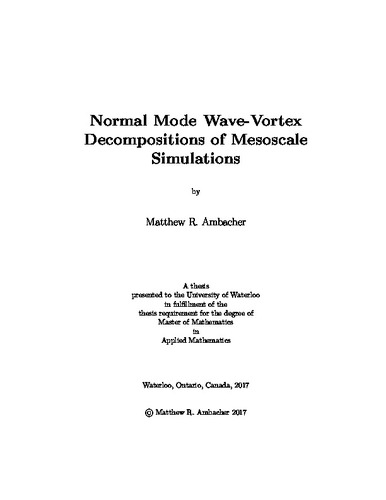 The kinetic energy spectrum of the atmosphere has been well observed to exhibit a k^(-3) power law at synoptic scales with a transition to a shallower k^(-5/3) power law at the mesoscale. To better understand the mesoscale kinetic energy spectrum, the spectrum can be decomposed into the two dominant modes at this scale: quasi-horizontal vortex motion and inertia-gravity wave motion. A commonly used technique for this is a Helmholtz decomposition of the horizontal velocity into rotational and divergent components, representing the geostrophically balanced and inertia-gravity wave modes, respectively. This decomposition is a crude approximation, since geostrophically balanced flows have small but non-zero divergence and inertia-gravity waves can have non-zero rotational energy. We investigate the mesoscale spectrum generated in a moderate-resolution, doubly-periodic, non-hydrostatic simulation of a baroclinically unstable jet. A three-dimensional normal mode decomposition is used to decompose the total energy into geostrophic and ageostrophic components. We compare the results with the Helmholtz decomposition and find they are qualitatively similar, but ageostrophic modes increasingly dominate with increasing vertical wave number. Specifically, we find the geostrophic mode in the mesoscale to have a steeper spectral slope than the spectral slope of the rotational component of the Helmholtz decomposition at -3.1 and -2.7, respectively. The difference between the spectral slopes of the ageostrophic and divergent modes are much greater, with mesoscale slope values of -2.7 and -1.9, respectively. We find that the reason for these differences can be attributed to both the inclusion of the available potential energy in the normal mode decomposition, and the inclusion of rotational energy in the ageostrophic mode of the normal mode decomposition.