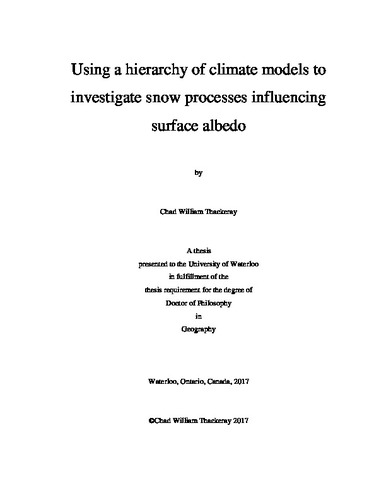 Northern Hemisphere (NH) extratropical land has experienced dramatic warming over the past century, a trend that is expected to continue in the coming decades. There is however, significant uncertainty surrounding projections of climate change. Warming has major impacts on the terrestrial cryosphere, particularly its largest component, snow cover. Snow is a significant climatological variable because of its role in the surface radiative and water balances. The combination of extensive snow cover and relatively high incoming radiation during spring make the NH climate system highly sensitive to concurrent changes in surface albedo, largely tied to snow albedo feedback (SAF). SAF is a positive feedback climate mechanism, whereby an initial warming is enhanced through a reduction in surface albedo resulting from melting snow (revealing a darker, less reflective surface). The current generation of global climate models (GCMs) accurately capture this process on average, but there is a large intermodel spread that arises because of differences in model design. Variability in SAF has been shown to account for 40-50% of the spread in projected NH land warming. To better synthesize the current state of knowledge regarding snow albedo feedback, a review article on the topic was published (Chapter 2). In this chapter, we summarize the importance of SAF, estimates from both models and observations, factors influencing the spread in SAF, and outstanding issues related to our understanding of the physical processes that control SAF. The remainder of this thesis focuses on the critical evaluation of processes influencing simulated SAF (snow cover and surface albedo). Prior research has shown that a commonly used GCM (Community Climate System Model; CCSM) suffers from a weak bias in SAF over the boreal forest and links this to deficiencies in how it represents snow processes. This model bias is traced to the way snow interacts with the forest canopy layer causing snow-covered surface albedo to decrease prematurely. Following on from this work, we expand our analysis to evaluate all current GCMs to see if this issue is prevalent elsewhere. Using a variety of metrics, the models are shown to have substantial biases in simulated surface albedo over snow-covered land (especially boreal forest and non-boreal tundra). Model biases are principally tied to either the timing (i.e., CCSM) or magnitude of seasonal changes in surface albedo. Having demonstrated deficiencies in the simulation of surface albedo, we next determine the impact that these model biases have on climate (Chapter 4). The experimental design overrides the model’s (biased) internal calculation of albedo and replaces it with prescribed albedo data, derived from satellite observations, or from another model. Results show that correcting the albedo in CESM (successor of CCSM) pushes the model further away from observed temperature (implying the presence of other biases), with robust cooling during winter and spring. It also induces a pattern reversal of climatological biases in winter sea level pressure, partially correcting the model’s tendency towards a positive Arctic Oscillation. Furthermore, biases across the boreal forest region are found to be influential for both local and remote climate features. Models with large albedo magnitude biases are vulnerable to even greater climate impacts than CESM. Lastly, in Chapter 5, we investigate the uncertainty in historical and future simulations of Northern Hemisphere spring snow cover using data from two climate model ensembles, seven observational snow products, and five temperature datasets. We find that the models underestimate the observed trend in historical snow cover, however, biases are much smaller than identified by previous studies that relied on a single observational dataset. The underestimation can be partially explained by biases in the climatological snow amount (i.e., starting the melt period with not enough snow cover) and a lack of sensitivity to warming in many models. The intermodel spread in future projections of snow cover can be largely explained by differences in simulated warming, and the amount of snow cover available for melt. The strong coupling between these features implies that by reducing the spread in projected NH land warming, uncertainty in snow cover would follow suit. The overall aim of this research is to improve knowledge of terrestrial snow processes influencing climate through changes in albedo. This thesis encompasses the identification of issues related to the simulation of snow processes in GCMs, and the determination of their importance to climate with the long term aim of helping to reduce uncertainty in projections of climate change.