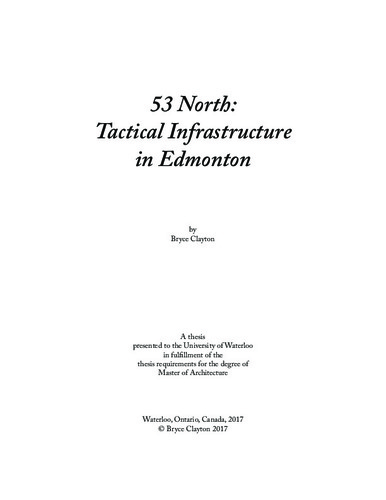 Edmonton, Alberta is the northernmost major city in North America, but inappropriate urban form has created a winter culture of avoidance. Long, straight city streets and a proliferation of voids within the downtown urban fabric are characteristic of many American cities, but when this condition is replicated in the far north the negative aspects of the winter season are amplified as arctic winds sweep through the streets and open spaces, and daily activity is driven indoors. As urban design has failed to account for the winter conditions, architecture has overcompensated in its response. Mechanical climate control is overused creating sharply delineated areas of over-protection and total exposure, creating harsh transitions for citizens as they move through built and unbuilt environments. But as the urban design has made winter life more difficult, the voids it has produced can also provide the spaces in which winter life can be embraced. For Edmonton to become a healthy “Winter City” it must attempt new approaches in urban and architectural design to resolve both its lifeless downtown core and the societal rejection of winter. This thesis proposes a new design tool whereby the intrinsic values of snow can be utilized to create winter public spaces to temporarily occupy the urban void. A new structure is proposed where City groups will act as coordinators sanctioning land parcels for urban interventions using the snow on each site and that cleared by the municipal workers, sculpted into basic forms. When used in combination, the forms create protective, desirable micro-climates which inject program and activity into the formerly vacant lots, introducing positive winter activity into the realm of daily life in Edmonton. The iterations in form serve a dual purpose by acting as a testing grounds, discovering new urban and architectural design strategies through experimentation and observation, informing future designs within the city.