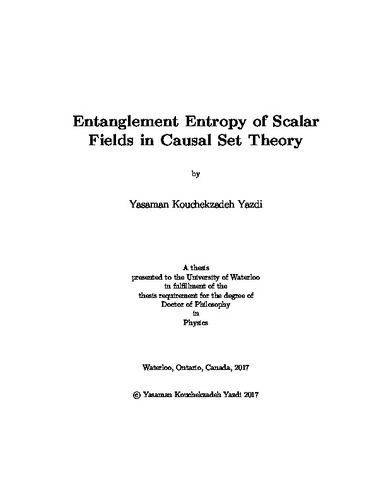 Entanglement entropy is now widely accepted as having deep connections with quantum gravity. It is therefore desirable to understand it in the context of causal sets, especially since they provide the UV cutoff needed to render entanglement entropy finite in a natural and covariant manner. Defining entropy in a causal set is not straightforward because the type of canonical hypersurface-data on which definitions of entanglement typically rely is not available in a causal set. Instead, we appeal to a more global expression given in [1] which, for a gaussian scalar field, expresses the entropy of a spacetime region in terms of the field’s correlation function within that region. We first consider this spacetime entropy for a 1+1-dimensional "causal diamond" in a flat continuous spacetime immersed in the vacuum within a larger causal diamond (our choice of vacuum being the Sorkin-Johnston vacuum described more fully in Chapter 2). The spacetime entropy of the smaller diamond in this case measures (when interpreted spatially) the entanglement between a line-segment and its complement within a larger line-segment. In this situation we carry out the computation numerically for a massless scalar field. The required ultraviolet cutoff is implemented as a truncation on spacetime mode sums, and we find excellent agreement with the expected form of the entropy (i.e. an area law) from conformal field theory. Carrying this formula over to a causal set, one obtains an entanglement entropy which is finite with a natural UV cutoff and Lorentz invariant. Herein we evaluate this entropy for causal sets sprinkled into a 1+1-dimensional causal diamond in flat spacetime, and specifically for a smaller order-interval (causal diamond) within a larger concentric one. We find in the first instance an entropy that obeys a (spacetime) volume law instead of the expected (spatial) area law. We find, however, that one can obtain the expected area law by following a prescription for truncating the eigenvalues of a certain "Pauli-Jordan" operator and the projections of their eigenfunctions on the Wightman function that enters into the entropy formula. We also study the "entropy of coarse-graining" generated by thinning out the causal set, and we compare it with what one obtains by similarly thinning out a chain of harmonic oscillators, finding the same "universal" behaviour in both cases.