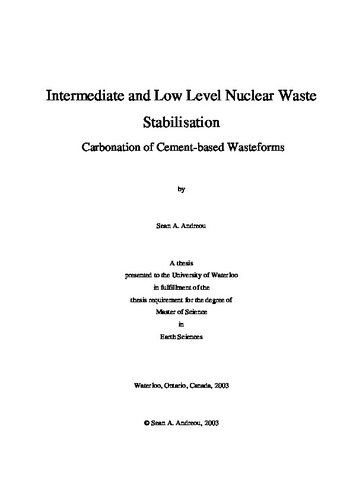 Carbonation is a naturally-occurring process whereby Ca-containing cement phases lose their hydration water and are converted to carbonate minerals by reaction with atmospheric CO&#8322;. As these secondary minerals develop in the microstructure of hydrated cement, porosity, pore-size distribution and permeability are decreased. These are all considered desirable properties in a wasteform. The objective of this study was to examine the effect of carbonation and different pozzolans on the leach performance and mechanical strength of ordinary Portland cement (OPC) wasteforms. Two methods of accelerated cement carbonation were used: <ol> <li>A vacuum carbonation method, where wasteforms are placed in an evacuated, sealed cell and subjected to small additions of CO&#8322; over several days at near vacuum conditions; and <li>A one-step carbonation method, where CO&#8322; gas is added to the wasteform paste as it is being mixed. </ol> Thirteen elemental constituents of interest to the safety assessments of long-term management of Ontario Power Generation's radioactive waste (Cl, N, S, Se, 13C, Th, Pb, Co, Ni, Cu, Sr, Ba and Cs) were stabilised/solidified via cement mix water. Wasteforms were produced with only OPC, OPC and fly ash, or OPC and silica fume. Most wasteforms were carbonated using one of the carbonation methods. Some wasteforms were not carbonated and served as controls. Wasteforms were subjected to either standard leach tests or compressive strength tests. The extent of carbonation was found to be about 20% for vacuum carbonation method, substantially higher than that for one-step treatment (up to about 10%). For vacuum carbonated wasteforms, carbonation occurred at the outer selvages of the wasteforms, whereas one-step treatment resulted in homogenous carbonation. Generally, compared to uncarbonated OPC wasteforms, vacuum carbonation increased leaching of elements that are anionic in cementitious conditions (Cl, N, S, Se, 13C, Th), decreased leaching of large metal cations (Sr, Ba, Cs, Pb) and had negligible effect on the leaching of the elements that form hydroxyl complexes (Co, Ni, Cu). 13C was the only anionic element whose leachability was reduced by vacuum carbonation, as it may be precipitated in the form CO32- in the large quantity of secondary carbonate minerals produced during the vacuum carbonation process. One-step carbonation did not result in substantial reductions in leachability, compared to uncarbonated OPC wasteforms. However, it had an interesting inverse effect on large metal cation leachability from fly ash- and silica fume-containing wasteforms. A model is presented that proposes that porewater pH changes can have an effect on waste element leachability because 1) the C-S-H Ca/Si ratio is dependent on the equilibrating porewater pH and 2) the degree of ion sorption on C-S-H is dependent on the C-S-H Ca/Si ratio. This model should be tested experimentally as it has important implications on wasteform design. Because of this inverse behaviour, overall neither pozzolan outperformed the other with respect to leachability. Generally, for uncarbonated wasteforms, OPC retained the elements more effectively than OPC with pozzolans. For pozzolans, the leachability of these elements from OPC with fly ash was lower than that of OPC with silica fume. Leaching of Cs was anomalously low from uncarbonated OPC wasteforms, but follow-up experimentation did not corroborate this anomaly. Further testing of these wasteforms to determine how the mineralogical fate of Cs can differ between wasteforms is recommended. All wasteforms tested were of acceptable strength (<0. 689 MPa). Fly ash, and, to a greater degree, silica fume, improved wasteform strength when compared to OPC wasteforms. Carbonation treatments had little effect on wasteform strength. This study has provided much information about the leaching characteristics of a representative set of waste elements from several cement-based wasteform treatments. Although it has not indicated a wasteform design that is ideal for all elements studied, it does suggest that some treatments may be effective for certain groups of elements. Most notably, vacuum carbonation shows promise in improving the immobilisation of isotopes of large metal cations such as Sr, Ba, Cs and Pb as well as 14C (as suggested by 13C here) in cement-based wasteforms.