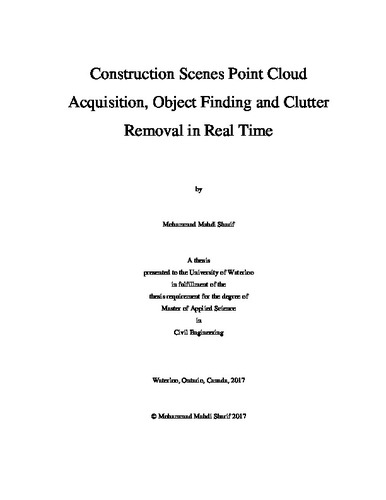 Within industrial construction, piping can constitute up to 50% of the cost of a typical project. It has been shown that across the activities involved in pipe fabrication, pipe fitting has the highest impact on the critical path. The pipe fitter is responsible for interpreting the isometric drawing and then performing the tack welds on piping components so that the assembly complies with the design. Three main problems in doing this task are identified as: (1) reading and interpreting the isometric drawing is challenging and error prone for spatially complicated assemblies, (2) in assemblies with tight allowable tolerance, a number of iterations will take place to fit the pipes with compliance to the design. These iterations (rework) will remain unrecorded in the production process, and (3) no continuous measurement tool exists to let the fitter check his/her work in progress against the design information and acceptance specifications. Addressing these problems could substantially improve pipe fitters’ productivity. The objective of this research is to develop a software package integrating a threefold solution to simplify complex tasks involved in pipe fabrication: (1) making design information easier to understand, with the use of a tablet, 3D imaging device and an application software, (2) providing visual feedback on the correctness of fabrication between the design intent and the as-built state, and (3) providing frequent feedback on fabrication using a step-by-step assembly and control framework. The step-by-step framework will reduce the number of required iterations for the pipe fitter. A number of challenges were encountered in order to provide a framework to make real time, visual and frequent feedback. For frequent and visual feedback, a real time 3D data acquisition tool with an acceptable level of accuracy should be adopted. This is due to the speed of fabrication in an industrial facility. The second challenge is to find the object of interest in real time, once a point cloud is acquired, and finally, once the object is found, to optimally remove points that are considered as clutter to improve the visual feedback for the pipe fitters. To address the requirement for a reliable and real time acquisition tool, Chapter 3 explores the capabilities and limitations of low cost range cameras. A commercially available 3D imaging tool was utilized to measure its performance for real time point cloud acquisition. The device was used to inspect two pipe spools altered in size. The acquired point clouds were super-imposed on the BIM (Building Information Model) model of the pipe spools to measure the accuracy of the device. Chapter 4 adapts and examines a real time and automatic object finding algorithm to measure its performance with respect to construction challenges. Then, a K-Nearest Neighbor (KNN) algorithm was employed to classify points as being clutter or corresponding to the object of interest. Chapter 5 investigates the effect of the threshold value “K” in the K-Nearest Neighbor algorithm and optimizing its value for an improved visual feedback. As a result of the work described in this thesis, along with the work of two other master students and a co-op student, a software package was designed and developed. The software package takes advantage of the investigated real time point cloud acquisition device. While the object finding algorithm proved to be effective, a 3-point matching algorithm was used, as it was more intuitive for the users and took less time. The KNN algorithm was utilized to remove clutter points to provide more accurate visual feedback more accurate to the workers.