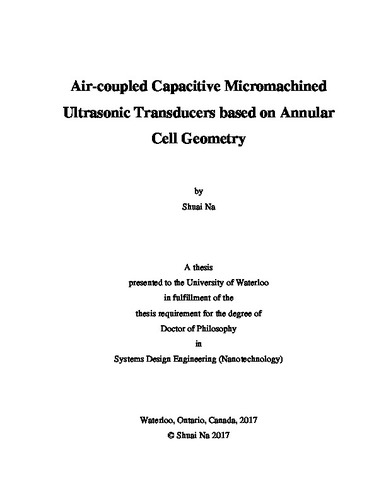 Air-coupled ultrasound is gaining increasing industry momentum due to the demands and development of non-destructive evaluation (NDE) of aerospace composite materials. Currently, the micromachining technology has advanced such that vacuum cavities sealed by thin plates, known as Capacitive Micromachined Ultrasonic Transducers (CMUTs), can be fabricated through silicon micromachining processes in a low cost manner. Given the thin plates, a CMUT is able to vibrate with a low mechanical impedance and thus a high coupling efficiency with the ambient atmosphere. Nevertheless, air-coupled applications are still highly limited by the transmit power of air-coupled CMUTs. A circle is the routine geometry in most CMUT cell designs. Even though efforts have been put forward to address the limitations of circular design in terms of sensitivity, more investigation about other cell geometries is prudent. In this work, a novel air-coupled CMUT design with annular cell geometry is proposed. Finite element analysis and experimental studies demonstrated its significant improvement in transmit efficiency over the conventional circular-cell CMUTs. A lumped element model was constructed to facilitate a better understanding and provide an efficient design technique of the annular CMUT. Three optimization schemes were developed to optimize the transmit efficiency and achieve a reasonable comparison between the novel annular and conventional circular CMUT cells. Based on the lumped models, a design optimization flow chart was constructed to facilitate the analytical optimization of the three schemes. To further enhance the transmit power as well as offer depth focusing, a 9-element concentric annular-cell array was designed, fabricated, and characterized. A pillar-free etching process was developed to create the deep large-area cavities. The cross-talk between neighbouring cells and the plate-cracking phenomenon were discussed with suggestions for improvement being provided. This study provides a systematic framework for designing and studying annular-cell CMUTs and demonstrates their great potential in transmitting high-power ultrasound in air.