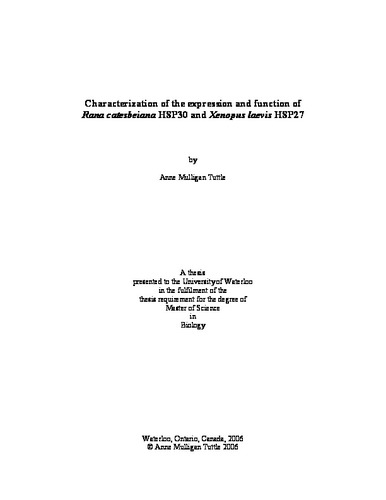 Exposure of cells to environmental or chemical stressors will initiate the heat shock response, which is mediated by heat shock proteins. Heat shock proteins are molecular chaperones which are classified by size into six main families: HSP100, HSP90, HSP70, HSP60, HSP40 and the small heat shock proteins (sHsps). The sHsp family members bind to denatured proteins and maintain them in a folding competent state such that they may be refolded by other molecular chaperones. <br /><br /> The present study examined the expression and function of two amphibian sHsps, namely, <em>Rana catesbeiana</em> HSP30 and <em>Xenopus laevis</em> HSP27. Initially, an antisense riboprobe was produced to study the mRNA accumulation of <em>Rana hsp30</em> in cultured tongue fibroblast (FT) cells. Results showed that <em>Rana hsp30</em> mRNA was optimally induced when maintained at 35&deg;C for 2 h. An antibody to the recombinant <em>Rana</em> HSP30 protein was also produced in order to study HSP30 protein accumulation in <em>Rana</em> FT cells. Analysis showed that <em>Rana</em> HSP30 was heat-inducible and accumulated maximally at 4 h when maintained at 35&deg;C and then allowed to recover at 22&deg;C for 2 h. Immunocytochemical analysis indicated that <em>Rana</em> HSP30 protein was present primarily in the nucleus, with diffuse localization in the cytoplasm. Additional immunocytochemical analysis showed that <em>Rana</em> HSP30 remained in the nucleus following heat stress and extended periods of recovery. <br /><br /> The molecular chaperone function of <em>Rana</em> HSP30 was also studied. Recombinant <em>Rana</em> HSP30 was found to inhibit the heat induced aggregation of various target proteins including citrate synthase, luciferase and malate dehydrogenase. Also, no major difference was detected between <em>Rana</em> HSP30 and <em>Xenopus</em> HSP30C in the inhibition of heat-induced aggregation of target proteins. <br /><br /> This study also examined the expression and function of <em>Xenopus laevis</em> HSP27. Analysis of the putative amino acid sequence of the <em>Xenopus hsp27</em> cDNA revealed that it had an identity of 71% with chicken, 65% with zebrafish, 63% with human and 53% with topminnow. Most of the identity was located within the &alpha;-crystallin domain of the protein. Interestingly, <em>Xenopus</em> HSP27 shared only a 19% identity with 2 other <em>Xenopus</em> sHsps, HSP30C and HSP30D. <br /><br /> Western blot analysis using an anti-<em>Xenopus</em> HSP27 antibody revealed that HSP27 was not detectable in cultured kidney epithelial cells. However, examination of early <em>Xenopus</em> embryos revealed that HSP27 was first detected in tadpole embryos (stage 44). Heat-inducible HSP27 was also first detected at this stage. The accumulation pattern of <em>Xenopus</em> HSP27 protein was distinct from <em>Xenopus</em> HSP30, which was heat-inducible at midtailbud stage 26, approximately two and a half days earlier in development. <br /><br /> Analysis of recombinant HSP27 by native pore exclusion limit electrophoresis showed that it formed high molecular weight, multimeric complexes. The molecular chaperone function of HSP27 was assessed by means of thermal aggregation assays employing citrate synthase, luciferase and malate dehydrogenase. <em>Xenopus</em> HSP27 inhibited the heat-induced aggregation of all of these target proteins. This study has revealed that <em>Xenopus</em> HSP27 is a member of the HSP27 subfamily of small heat shock proteins in <em>Xenopus</em> and distinct from the HSP30 family. The accumulation of HSP27 under constitutive and stress-inducible conditions is developmentally regulated. Finally, this sHsp appears to function as a molecular chaperone.