Evaluation and Calibration of Pedestrian Bridge Standards for Vibration Serviceability 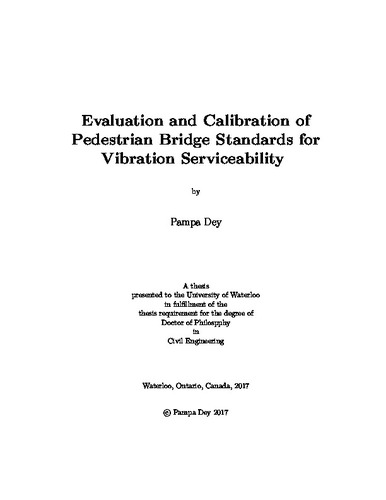 An increase in the use of lightweight materials and emphasis on architecturally appealing designs has resulted in lively pedestrian bridges. A prominent example for this is the serviceability failure of the London Millenium Bridge in 2001, where excessive vibrations from inauguration crowds resulted in shutting down the structure. While the bridge was subsequently retrofitted with damping devices, this incident brought often overlooked and poorly understood issues on pedestrian bridges to the fore. Various load models and design procedures have since been proposed to assess the serviceability of pedestrian bridges under walking-induced loads, load modelling being the one that has attracted the most attention in the recent years. In general, all of the existing design provisions employ a Fourier series approach to modelling the foot-fall force due to a single pedestrian and extrapolate this to groups through multiplication factors. Despite two decades of use, there are significant discrepancies amongst the provisions and little has been done in terms of evaluating them, especially using experimental data. The main objectives of this thesis are two-fold: first, a comprehensive evaluation of existing standards is undertaken to understand the performance of the existing design provisions in predicting the actual performance of lively pedestrian bridges; next, changes are recommended based on such experiments to key factors used in the provisions to better align the observations with the predictions. In the current study, design provisions currently being used in North America and Europe are evaluated, including ISO 10137, Eurocode 5, the British National Annex to Eurocode 1, and SÉTRA. The experimental program was undertaken on three full-scale aluminum pedestrian bridges; one in the field and two in the laboratory. Aluminum structures provide a high strength-to-weight ratio, are corrosion resistant, and aesthetically pleasing. Due to their relative light weight, they can be built in a laboratory environment to full-scale and still produce lively structures that can be excited with relatively lower actuation compared to comparable steel or concrete structures. The current experimental study focuses on such cases where there is the possibility of resonance with the higher harmonics of the walking frequency, not just the fundamental frequency. The test bridges were instrumented and subjected to a range of modal and pedestrian walking tests of varying traffic sizes. The comparison results between the predicted and measured responses show that commonly employed load models for single pedestrian walking can sometimes be un-conservative. Moreover, the outcomes from the serviceability assessment under crowd-induced loading show significant differences in the predicted responses by the guidelines with respect to the measurements, which are mainly attributable to differences in the dynamic load factors adopted in the guidelines, and lack of guidance on the appropriate walking speeds in crowd loading conditions and the factor scaling the individual pedestrian load to multiple pedestrians. Additionally, the guidelines are evaluated in a reliability-based framework to incorporate the potential uncertainties associated with the walking loads, structural properties, and occupant comfort limits. The key results point towards calibrating the current design provisions to a higher reliability index for the design events in order to achieve sufficiency during the non-frequent or rare loading events. Hence, an attempt is made towards to improving the predictions by the guidelines. Several recommendations are proposed to harmonize the design provisions with each other and with measurements. The recommended modifications lead to a substantial improvement in the predicted responses by the guidelines. In the next step, the design provisions are calibrated for higher reliability to achieve acceptable performance during the design as well as non-frequent (rare) heavy traffic loading events. For this purpose, the reliability level required for the calibration process is estimated and corresponding partial factors for the calibrated design are reported. The study also suggests adopting comfort limits based on the frequency of occurrence of the traffic event and the pedestrian bridge class in order to yield economic designs.