A Picture is Worth a Thousand Words: A Randomized Controlled Trial to Assess the Impact of a Computerized Pictorial Medication Calendar Medication Taking Behaviour 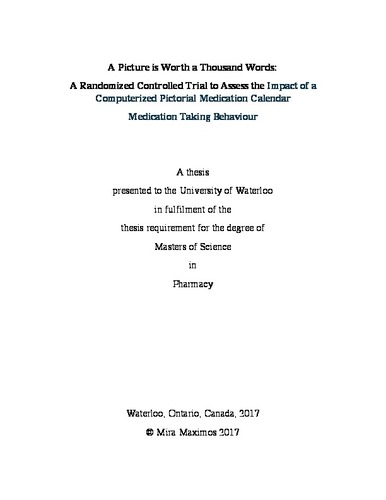 OBJECTIVES The primary was to determine if a pictorial medication calendar would improve patient adherence to supportive medication regimens for adult patients receiving chemotherapy treatment. The secondary objectives were to: a) assess if the pictorial medication calendar would improve concordance with prescribed supportive care medication regimens, b) assess patient satisfaction associated with using the calendar and c) determine whether this tool affects participants' quality of life. METHODS Prospective, open-label, RCT with participants randomly assigned 1:1 to receive either routine care or routine care plus the intervention. Adherence was measured using pill count and diary. Concordance was measured by assessment of symptoms of nausea and vomiting in relation to PRN antiemetic use. Medication use and self-efficacy was evaluated using the MUSE scale. Participant satisfaction was evaluated using surveys created by the research team. A correlation analysis was performed between pills dispensed and taken as per the different adherence tools and a line of best fit was plotted where possible. A mean score difference was performed for the MUSE Scale results from baseline to end of study. A regression analysis was performed to determine if the symptoms of nausea and vomiting could predict the number of PRN anti-emetics taken. Data on participant satisfaction was analyzed graphically. RESULTS The correlation between scheduled pills dispensed and taken as per pill count was p<0.001, r=0.96. The correlation between scheduled pills dispensed and taken as per the diary was p=0.015 and r=0.71. The correlation between the PRN number of pills taken as per the pill count and average symptoms recorded in the diary was r=0.65 and p=0.06. The correlation between the number of PRN pills taken as per the diary and the average symptom score was p=0.47, r= 0.28 and between the PRN pills taken as per the diary and the number as per the pill count was p=0.19 and r=0.49. For the regression analysis model that assesses whether symptoms can predict PRN medication use in the intervention arm, F (2,3)=7.24, r2=0.8284, adjusted r2=0.7141, p=0.035. Due to the low number of participant data in the control arm, a regression analysis was not possible. The line of best fit for the intervention arm was y=-0.09x+3.06, R² = 0.05 and for the control arm, y=1.11x+0.16, R² = 0.92. For the intervention arm, the mean of score difference for the MUSE scale was 0.7, std. dev. = 4.40. For the control group arm the mean of the score difference of the MUSE scale was 1.86, std. dev.= 4.99. The alternative hypothesis, Ha: diff>0, where Pr (T>t)= 0.67, t (15)= -0.46 was chosen. Of the 17 participants for which results were available for the survey, 8 of the intervention group participants and 3 of the control group participants completely disagreed that the medication regimen was complicated, 1 participant in the intervention group and 2 in the control group moderately disagreed, none of the participants neither agreed nor disagreed, 1 in the intervention arm and 2 in the control arm moderately agreed and no participants completely agreed. Participants that received the calendar found it useful for medication taking behaviours. Approximately 80% of participants either moderately or completely agreed that the diary helped keep track of medications, with which medications to take, when to take them and how many times per day. DISCUSSION There appeared to be a correlation between scheduled pills taken as per the pill count and as per the diary, however the correlation was not statistically significant. Participants in both arms tended to take the majority of all prescribed medications according to both pill count and diary. There appeared to be a trend towards predictability of PRN anti-emetic use with increased symptoms, however this trend was only visible with pill count and not with the ORN anti-emetic pills taken as per diary recording. The MUSE scale results between the intervention and control arm did not appear to be significantly different. Of the intervention arm participants who answered the questions related to the calendar, the majority either moderately or completely agreed that it was a useful tool. Therefore, at this point it cannot be assumed that medication use and self-efficacy is improved with the use of the calendar. Participants in the control arm found the treatment regimen less complicated overall. The pictorial medication calendar tool may have played a factor in this response as those in the intervention arm would have not only been given routine care, but also would have received further information from the pictorial medication calendar. CONCLUSION Therefore, it appeared that the calendar was a useful tool, subjectively to participants involved in the study for ease of medication use. Furthermore, it also appears that participants who received the diary felt that their regimen was less complex. However, at this point it cannot be stated that the tool significantly affects adherence in a statistically significant manner as further data collection is required.

Mira Maximos (2017). A Picture is Worth a Thousand Words: A Randomized Controlled Trial to Assess the Impact of a Computerized Pictorial Medication Calendar Medication Taking Behaviour. UWSpace. http://hdl.handle.net/10012/12132