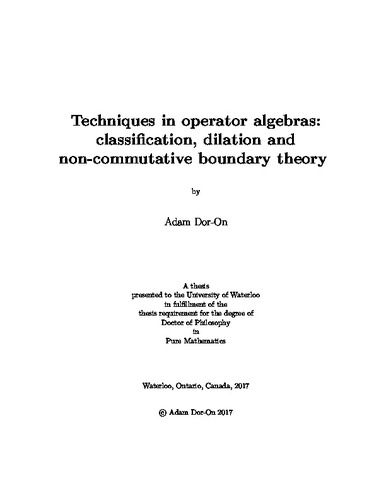 In this thesis we bring together several techniques in the theory of non-self-adjoint operator algebras and operator systems. We begin with classification of non-self-adjoint and self-adjoint operator algebras constructed from C*-correspondence and more specifically, from certain generalized Markov chains. We then transitions to the study of non-commutative boundaries in the sense of Arveson, and their use in the construction of dilations for families of operators arising from directed graphs. Finally, we discuss connections between operator systems and matrix convex sets and use dilation theory to obtain scaled inclusion results for matrix convex sets. We begin with classification of non-self-adjoint operator algebras. In Chapter 3 we solve isomorphism problems for tensor algebras arising from weighted partial dynamical systems. We show that the isometric isomorphism and algebraic / bounded isomorphism problems are two distinct problems, that require separate criteria to be solved. Our methods yield an alternative solution to Arveson's conjugacy problem, first solved by Davidson and Katsoulis. A natural bridge between operator algebras / systems and C*-algebras is the C*-envelope, which is a non-commutative generalization of the notion of \emph{Shilov boundary} from the theory of function algebras. In Chapter 4 we investigate C*-envelopes arising from the operator algebras of stochastic matrices via subproduct systems. We identify and classify these non-commutative boundaries in terms of the matrices, and exhibit new examples of C*-envelopes of non-self-adjoint operator algebras arising from a subproduct system construction. In Chapter 5 we apply Arveson's non-commutative boundary theory to dilate every Toeplitz-Cuntz-Krieger family of a directed graph $G$ to a full Cuntz-Krieger family for $G$. We also obtain a generalization of our dilation result to the context of colored directed graphs, which relies on the complete injectivity of amalgamated free products of operator algebras. The last part of this thesis is devoted to the interplay between matrix convex sets and operator systems, inspired by the work of Helton, Klep and McCullough. In Chapter 6 we establish a functorial duality between finite dimensional operator systems and matrix convex sets that recovers many interpolation results of completely positive maps in the literature. We proceed to investigate dual, minimal and maximal matrix convex sets, and relate them to dilation theory, scaled inclusion results and operator systems. By using dilation theory, we provide \emph{rank-independent} optimal scaled inclusion results for matrix convex sets satisfying a certain symmetry condition, and prove the existence of an essentially unique \emph{self-dual} matrix convex set.