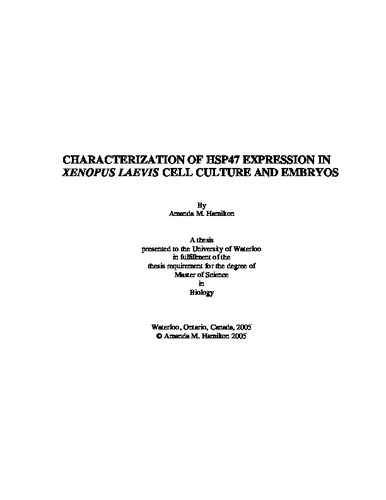 The heat shock or stress response is a transient response to stressful stimuli that protects vital cellular proteins from damage and irreversible aggregation. Heat shock proteins (Hsps) are molecular chaperones that bind to unfolded protein and inhibit their aggregation, thereby maintaining their solubility until they can be refolded to their native conformation. Hsp47 is an endoplasmic reticulum (ER)-resident protein that serves as a molecular chaperone during collagen production. Collagen is the major class of insoluble fibrous protein found in the extracellular matrix and in connective tissues. It is the single most abundant protein of the animal kingdom; at least 14 different forms exist, each with distinct structures and binding properties. The various types of collagen all possess protein regions with the distinct triple helical conformation. This complex physical structure requires very organized assembly and HSP47 has been established as an integral component of this process for collagen types I-V. Most of the previous studies examining the expression and function of hsp47 have been conducted with mammalian cultured cells. The present study represented the first investigation of the expression of hsp47 in the poikilothermic vertebrate, <i>Xenopus laevis</i>. Full-length <i>Xenopus</i> hsp47 nucleotide and amino acid sequences were obtained from Genbank and compared with hsp47 from chicken, mouse, rat, human and zebrafish. <i>Xenopus</i> HSP47 protein had an identity of approximately 77% with chicken, 73% with mouse, 72% with rat and human, and 70% with zebrafish. Most of the sequence identity between HSP47 from all investigated organisms occurred centrally in the amino acid sequence and in several carboxyl terminal regions. Three key features were conserved between HSP47 proteins from most species investigated: a hydrophobic leader sequence, two potential glycosylation sites and the ER-retention signal, RDEL. A partial cDNA clone encoding <i>Xenopus</i> hsp47 was obtained from the American Type Culture Collection (ATCC) and used to generate hsp47 antisense riboprobe for the purpose of investigating hsp47 mRNA accumulation in <i>Xenopus</i> A6 kidney epithelial cells and embryos. Northern blot analysis detected hsp47 mRNA constitutively in A6 cells. The expression pattern for hsp47 mRNA was compared with two other <i>Xenopus</i> heat shock proteins that have been previously characterized in our laboratory: hsp70, a cystolic/nuclear hsp and BiP, an ER-resident hsp. The results of hsp47 mRNA accumulation in A6 cells suggested that the expression pattern for <i>Xenopus</i> hsp47 was unique but, with respect to some stressors, resembled that of a cytosolic hsp rather than an ER-resident hsp. HSP47 protein levels were also examined in A6 cells. Heat shock, sodium arsenite and b-aminopropionitrile fumerate treatments enhanced hsp47 accumulation. In some experiments, western blot analysis revealed the presence of two closely sized protein bands. It is possible that minor differences in HSP47 protein size may be due to post-translational modification, namely phosphorylation or glycosylation. The present study also examined the accumulation and spatial pattern of hsp47 mRNA accumulation during <i>Xenopus laevis</i> early development. Hsp47 was constitutively expressed throughout <i>Xenopus</i> early development. Constitutive levels of hsp47 mRNA in unfertilized eggs, fertilized eggs and cleavage stage embryos indicated that these transcripts were maternally inherited. Constitutive hsp47 mRNA accumulation was enhanced in neurula and tailbud embryos compared to earlier stages. This finding may be explained by the shift towards organogenesis during these stages. Whole mount <i>in situ</i> hybridization revealed hsp47 message along the dorsal region of the embryo, in the notochord and somites, as well as in the head region including the eye vesicle. Hsp47 mRNA induction in <i>Xenopus</i> embryos was also examined in response to heat shock. Hsp47 mRNA accumulated in response to heat shock immediately following the midblastula transition (MBT). In tailbud stages, hsp47 mRNA accumulated in the notochord, somites and head region. Northern blot analysis and whole mount <i>in situ</i> hybridization results revealed an expression pattern that coincided well with the development of collagen-rich tissues thereby substantiating the proposed role of HSP47 as a procollagen molecular chaperone.