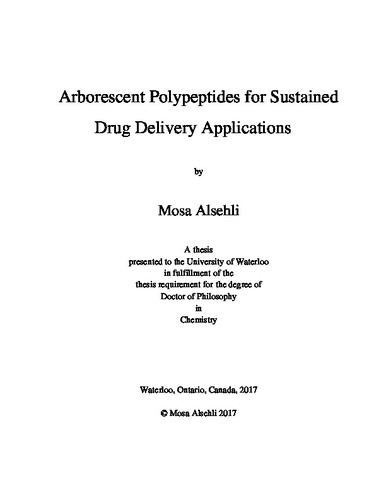 This Ph.D. dissertation describes the synthesis of arborescent copolymers of generations G1 and G2 designed to serve as drug delivery nanocarriers for cancer treatment. Poly(γ-benzyl L-glutamate) (PBG) building blocks were generated by ring-opening polymerization of γ-benzyl L-glutamic acid N-carboxyanhydride (Glu-NCA) initiated with n-hexylamine. Partial or full deprotection of the benzyl ester groups followed by coupling with PBG chains yielded a comb-branched (arborescent polymer generation zero or G0) PBG structure. Additional cycles of deprotection and grafting yielded G1 and G2 arborescent polypeptides. Optimization of the arborescent PBG synthesis was carried out in terms of the reaction temperature, solvent composition, reaction time, and mole ratio of reactants and coupling agents. Side chains of poly(ethylene oxide) (PEO) were then grafted either randomly or at the chain ends of the arborescent PBG substrates to produce amphiphilic arborescent copolymers denoted as PBG-g-PEO and PBG-eg-PEO, respectively. The branching density of the G0PBG substrates was controlled by varying the length and the deprotection level of the linear PBG substrates used in their synthesis. Three G0PBG cores with branching densities varying from a compact and dense to a loose and porous structure were thus synthesized. The arborescent PBG-g-PEO amphiphilic copolymers formed mostly unimolecular micelles with small amounts of aggregation in aqueous media, whereas arborescent PBG-eg-PEO were completely devoid of aggregation. The hydrodynamic diameter of the copolymers varied from 13 to 39 nm, depending on their generation number and the branching density of the G0PBG cores. The ability of these unimolecular micelles to encapsulate and release doxorubicin (DOX), an anticancer drug, was correlated with their generation number and the branching density of the hydrophobic cores. Both the drug loading content (DLC) and the drug loading efficiency (DLE) increased with the generation number of the copolymers as a result of increasing the PBG content in the micelles. For each generation, slightly higher values of DLE and DLC were observed for micelles with a denser core structure. The release profiles indicated that the drug release rate could be modulated by the generation number of the copolymers or by controlling the branching density, and thereby the porosity of the cores: Micelles with more densely branched cores decreased the diffusion rate of the drug. Three different strategies were examined to load DOX into G1PBG-eg-PEO and G2PBG-eg-PEO. The DOX was either physically entrapped (PBG-eg-PEO/DOX), loaded via electrostatic interactions (PGA-eg-PEO-DOX), or covalently conjugated to the unimolecular micelles via a pH-sensitive hydrazone bond (PGA-eg-PEO-Hyd-DOX). While all these systems had a good drug loading capacity, encapsulation via electrostatic interactions yielded the highest DLC and DLE. All these systems exhibited sustained and pH-responsive drug release behavior, with slower release at physiological pH (7.4) than at pH 5.5, but PGA-eg-PEO-Hyd-DOX had the best overall pH-responsive release behavior. The versatile encapsulation and release properties of these unimolecular micelles show that they could be useful as nanocarriers for a broad range of drug release applications.