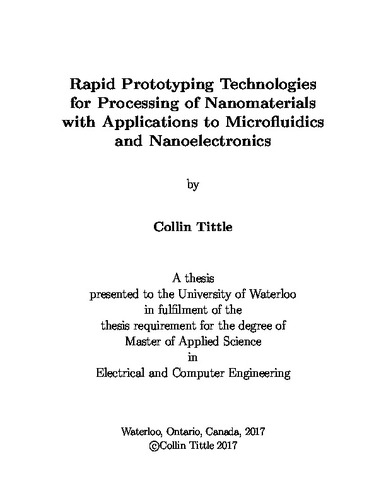 The focus of this thesis is on the processing of nanomaterials using rapid prototyping technologies. To develop the necessary skills in fabrication and electronics, a thin film microheater was developed and applied to genetic amplification using the polymerase chain reaction in a manner compatible with point-of-care settings. Subsequently these skills were applied to the processing and characterization of molybdenum disulfide for next generation electronics. After preliminary protocol and infrastructure development was achieved, the unexpected discovery of superhydrophobic behaviour present in laser processed Kapton films necessitated a change in focus. These films were investigated and discovered to be some of the most superhydrophobic surfaces ever reported while also addressing the long standing issues of durability and manufacturability. These films were then applied to membrane distillation for the desalination of water. For the energy efficient technique of air gapped membrane distillation, mass fluxes approach the state-of-the-art were achieved and no membrane failure was observed, indicating long lifetimes.