Physical Hydrogeology and Impact of Urbanization at the Waterloo West Side: A Groundwater Modelling Approach 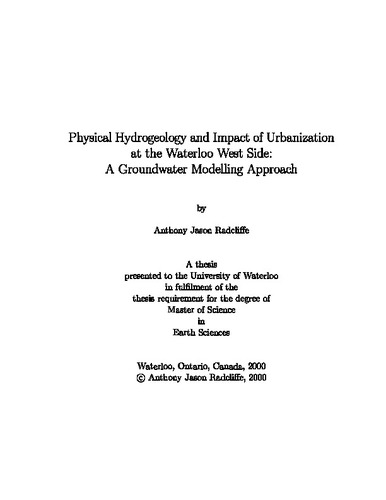 In the last few decades protection of the environment has moved to the forefront of earth science research. Sustainable development is becoming more important to rapidly growing communities throughout southern Ontario including the City of Waterloo which has adopted an ecosystem planning approach toward future urban expansion. The City of Waterloo is located in the Regional Municipality of Waterloo which relies mainly on local groundwater resources for its drinking water supply. The Waterloo West Side is a collective name for several new developments occurring at the western limit of the City of Waterloo. Development of the Waterloo West Side is encroaching on a potential regional groundwater recharge area. Recent studies have recommended that some of these developments will require artificial infiltration facilities to augment the reduction in infiltration rates at the post-development stage. For this study, the pre-development groundwater flow system was characterized using a three-dimensional finite element model (WATFLOW). The regional Waterloo Moraine Model (approximately 750 km2) was refined in the study area (approximately 25 km2) so as to include the regional-scale influence on the local-scale groundwater flow. In addition, to approximate the complex groundwater flow system, within the study area, modifications were made to the current conceptual model. Several existing techniques were utilized in the numerical approach including three-dimensional parameterization and automated calibration methods. Simulations were completed to steady-state therefore results are averaged on a yearly basis. The potential impact of urbanization on the groundwater flow system was investigated by modifying the surficial boundary condition to simulate post-development infiltration rates (increased runoff) in areas where development will occur. The impact to local surface water was investigated for each post-development scenario. In addition, the effect on the regional and local groundwater flow systems were compared for each scenario.

Anthony Radcliffe (2000). Physical Hydrogeology and Impact of Urbanization at the Waterloo West Side: A Groundwater Modelling Approach. UWSpace. http://hdl.handle.net/10012/1212