The Neural Processes of Perceived Simultaneity and Temporal Order in Younger and Older Adults using EEG. 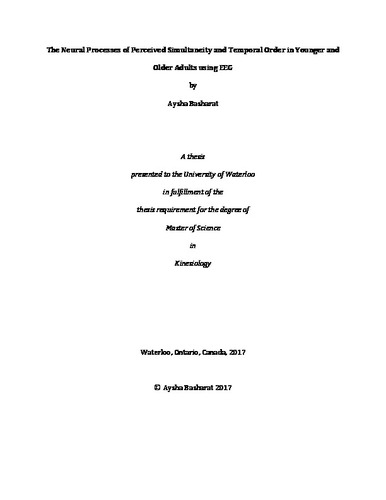 In order to make sense of the world, the central nervous system (CNS) must determine the temporal order of events and integrate cues that belong together. The process of integrating information from multiple sensory modalities is referred to as multisensory integration. The importance of this process is evident in everyday events such as speech communication or watching a movie. These events give rise to both auditory and visual sensations that are truly simultaneous or successive, which the CNS must determine. This thesis presents two experiments designed to determine how the CNS of younger and older adults processes audiovisual information to identify simultaneity and temporal order of events. 28 younger (experiment 1) and 28 older (experiment 2) adults participated in audiovisual tasks in which they were asked to decide whether audiovisual stimuli were presented simultaneously or successively (SJ) or which stimulus was presented first (TOJ). The probability of judging a light and a sound as occurring simultaneously, or whether a light occurred first were calculated to extract the point of subjective simultaneity (PSS) and the temporal binding window (TBW). The TBW represents the time within which auditory and visual cues are most likely perceived as being simultaneous. Event-related potentials (ERPs) time-locked to light and sound onset presented at 4 different stimulus onset asynchronies (SOAs) were also recorded. Results revealed task specific differences in perceiving simultaneity and temporal order, suggesting that each task may be subserved via different neural mechanisms. Auditory N1 and visual P1 ERP amplitudes confirmed that unisensory processing of audiovisual stimuli did not differ between the two tasks, indicating that performance differences between tasks arise from multisensory integration. Despite multisensory integration being implicated, the dissociation between SJ and TOJ was not revealed through auditory N1 and visual P1 amplitudes and latencies thus indicating that the decision-making role of higher-level networks may be contributing to the differences that exist between the two tasks. Consistent with previous literature, behavioural data tended towards older adults having a wider TBW than younger adults. While all participants had reported normal audition and vision, older adults showed a later visual P1 latency indicating that unisensory processing of visual information may be delayed with age. Compared to younger adults, older adults showed a sustained higher FCz auditory N1 ERP amplitude response across SOAs, which could correspond with broader response properties expected from an extended TBW. Together, this thesis provides compelling evidence that different neural mechanisms sub serve the SJ and TOJ tasks and that simultaneity and temporal order perception change with age.