The Development of an Average, Anatomically Based, Young Adult, GRIN Eye Model 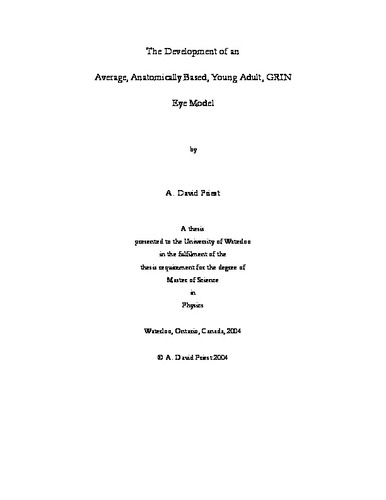 The purpose of this thesis is to describe the development of an anatomically based, young adult eye model, which includes a crystalline lens with a gradient refractive index (GRIN). This model will then be used to investigate the effect of laser refractive surgery. The first step in this process involved developing a symmetrical eye model that was found to be a better predictor of empirical longitudinal spherical aberration than any previous model. Myopia was simulated by either a purely axial or refractive technique. While these models were found to be good predictors of the spherical aberration measured in young adults, they did not predict the total amount of high-order aberrations. The techniques used to simulate a single type of myopia caused the myopic models to become anatomically inaccurate. To improve the eye models a biconic surface was used to quantify the anterior corneal shape as a function of myopia. A method to describe the refractive error and biconic shape parameters in Jackson Cross Cylinder terms was implemented to determine correlations. Results indicate that a biconic accurately models the average shape of the anterior corneal surface as a function of myopia. Adopting the biconic model for the anterior corneal surface and adding average misalignments of the ocular components transformed the models from symmetrical to asymmetrical. Refractive error was now simulated by the anatomically accurate changes in both the anterior corneal shape and axial length. The asymmetrical aberrations resulted from the misalignment of the ocular components and provided a good prediction of average empirical aberrations but underestimated the aberrations of individual subjects. Photorefractive keratectomy, a form of laser refractive surgery, was simulated by theoretically calculated and by empirically measured changes in the shape of the anterior corneal surface. Applying the change in anterior corneal shape to the asymmetrical models was used to develop postoperative models. Changes in corneal shape and model aberrations attributed to theoretical calculations do not match empirical observations. The prediction of increased high-order aberrations in postoperative models based on empirically measured changes in the anterior corneal topography was similar to clinical results. Average anatomically based, GRIN eye models have been developed that accurately predict the average aberrations of emmetropic and myopic young adults. These models underestimate the asymmetrical and total high-order aberrations that have been measured in individual subjects but are still useful for investigating the average effects of procedures like refractive surgery.