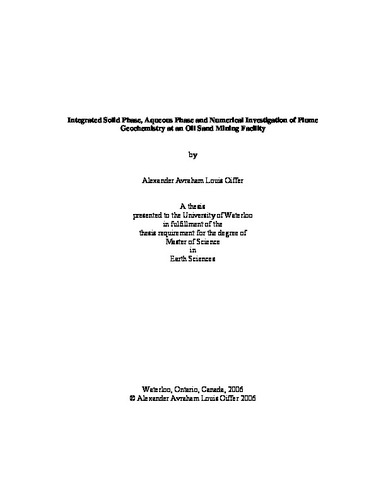 A plume of process-affected groundwater was identified in a shallow sand aquifer adjacent to a tailings impoundment at Syncrude Canada Ltd. Quantitative and qualitative Naphthenic Acid (NA) analyses were performed on groundwater samples to investigate NA fate and transport properties in the subsurface. Analysis of dissolved organic and inorganic components was undertaken to identify, quantify and assess the mobility of other dissolved components of environmental significance. NAs at concentrations up to 87 mg/L were found to represent the major contributor to aquatic toxicity. Attenuation of NAs by biodegradation is not observed based on screening techniques developed to date. Retardation of NAs observed at the field scale, is consistent with weak sorption observed in the laboratory by other authors. Concentrations of ammonium approached 4 mg/L in the plume, however mobility is limited by cation exchange. Aromatics and trace metals are present in low quantities (i. e. <10 µg/L) and are only detected in groundwater immediately adjacent to the toe of the tailings impoundment. Cl and Na are found at concentrations of up 282 and 579 mg/L respectively. Dissolved oxygen is typically < 1 mg/L within the plume, while redox indicators Mn(II), Fe(II) and methane are detected between <0. 1 - 2. 6, 0. 2 - 3. 5 and <0. 1 - 2. 1 mg/L respectively within the plume. Solid phase geochemistry, determined through solid phase extractions, was coupled with aqueous geochemistry and reactive transport modeling to identify the dominant geochemical processes occurring within the plume. Based on scenarios evaluated using reactive transport modeling, the most likely origin for the presently observed, weakly reducing conditions in the plume appears to be the presence of a small amount of disssolved, degradable organic carbon. The dominant terminal electron acceptors appear to be Fe(III) and Mn(III/IV) in the plume core and dissolved oxygen at the plume fringe. Dissolved Fe and Mn are observed to enter the domain at the upgradient boundary at maximal concentrations of 4. 2 and 0. 7 mg/L respectively. Trace metal geochemistry of the aquifer material was also assessed using solid phase extractions. The potential for trace metal release via reductive dissolution of the native geologic material is considered minimal in this case, based on the weakly reducing nature of the plume and a lack of excessive trace metal content in the aquifer material.