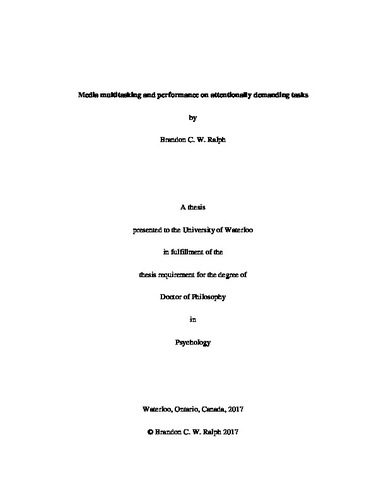 This dissertation examined the behaviour of media multitasking, with a specific focus on three broad goals. The first goal, explored in Chapter 2, was to examine whether individual differences in the propensity to media multitask are associated with performance on attentionally demanding tasks. One particular attentionally demanding task – the n-back – was selected as it yielded mixed findings in prior work. It was found that higher trait-levels of media multitasking were associated with poorer performance on the n-back in terms of higher false alarm rates, but also with a greater propensity to omit trials, a performance metric that often goes unreported. The second goal, examined in Chapter 3, was to assess whether the presence of a concurrent, non-required media stream (video) influences performance on an attentionally demanding task, and whether the presence or absence of such a media stream influences subjective judgments of performance. The general findings were that the presence of the non-required video negatively affects performance on the attentionally demanding task (n-back), and that participants judged their performance to be worse when the video was present than when it was absent. Lastly, the third goal, explored in Chapter 4, was to examine whether participants will modulate their exposure to a non-required media stream in response to the demands of a primary task. In addition to replicating findings from Chapter 3, in Chapter 4, when given direct control over the presence or absence of the media stimuli, participants performing a high-demanding task (2-back) were more likely to turn off the video than participants performing a low-demanding task (0-back). It also appears that having a concurrently available media may be beneficial, particularly in situations of low demand, as it might increase perceived demand of the task to reach a more optimal zone of engagement, as well as lead to reduced boredom. In Chapter 5, the findings are discussed in the context of alternative theoretical perspectives and the utility of a laboratory-based paradigm for studying media multitasking.