Amplitudes in the Spin Foam Approach to Quantum Gravity 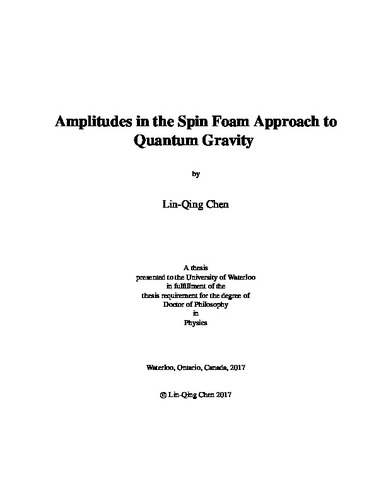 In this thesis, we study a Spin Foam model for 4D Riemannian quantum gravity, and propose a new way of imposing the simplicity constraints that uses the recently developed holomorphic representation. Rather than imposing the constraints on the boundary spin network, one can impose the constraints directly on the Spin Foam propagator. We find that the two approaches have the same leading asymptotic behaviour. This allows us to obtain a model that greatly simplifies calculations, but still has Regge Calculus as its semi-classical limit. Based on this newly developed model, we aim at answering the following questions that previously has never been properly addressed in the field: how to efficiently evaluate arbitrary Spin Foam amplitudes in 4D? Do we have residual diffeomorphism invariance of the model? What happens to the amplitudes under coarse graining? Can we learn the degree of divergence of an amplitude simply by its graphic properties? What type of geometry in the bulk has the dominant contribution to the partition function? Using the power of the holomorphic integration techniques, and with the introduction of new methods: the homogeneity map, the loop identity and a natural truncation scheme, for the first time we give the analytical expressions for the behaviour of the Spin Foam amplitudes under 4-dimensional Pachner moves. The model considered is not invariant under the 5--1 Pachner Move, as the configuration of five 4-simplices reduces to a single 4-simplex with an insertion of a nonlocal operator inside. Similar behaviour occurs also for the 4--2 move. The non-invariance under 5--1 move means that the vertex translation symmetry, the residual of diffeomorphism invariance for discrete gravity, is broken in this path integral formalism. We also developed a natural truncation scheme that captures the dominant contribution and preserves the geometrical structures, while at the same time efficiently reduces the complexity. We then push the result to be more general -- evaluating arbitrary amplitudes. We study the amplitudes on arbitrary connected 2-complexes and their degrees of divergence. First we derive a compact expression for a certain class of graphs, which allows us to write down the value of bulk amplitudes simply based on graph properties. We then generalize the result to arbitrary connected 2-complexes and extract a formula for the degree of divergence only in terms of combinatorial properties and topological invariants. By regulating the model, this result allows us to find the dominant contributions to the partition function, which gives us some valuable hints about the continuum limit. The distinct behaviors of the model in different regions of parameter space signal phase transitions. However, in the regime which is of physical interest for recovering diffeomorphism symmetry in the continuum limit, the most divergent contributions are from geometrically degenerate configurations. We finish with discussing possible resolutions, the physical implications for different scenarios of defining the continuum limit and the analytical insights we have gained into the behavior of Spin Foam amplitudes.