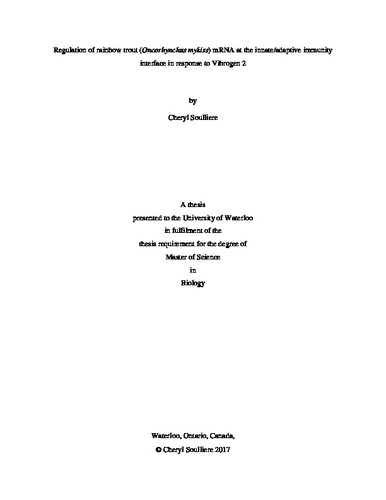 Aquaculture supplies the world market with over 50% of food fish and is an economically important industry, however limited disease management strategies often lead to significant economic losses and/or poor-quality product. Historically, antibiotics were used prophylactically and as a treatment in disease outbreaks caused by bacterial infections, however, due to antibiotic resistance among pathogens alternative methods for disease control are required and strong vaccination programs are essential. Vibrogen 2, is considered a successful vaccine available for use in aquaculture, however the reasons for this success are poorly understood. Furthermore, while fish appear to have immunological machinery and signaling molecules similar to those found in mammals, evidence suggests fish may use these immune mechanisms differently. In this study, the early immune response elicited by Vibrogen 2 vaccination in rainbow trout head kidney and RTS11 cells was examined through investigation of mRNA expression of two pro-inflammatory cytokines; IL-1β and IFNγ, as well as the mRNA expression of MH class I associated TAP1 and MH class II associate S25-7, to understand the efficacy of the bacterin, as well as, the innate/adaptive immunity interface in teleosts. In RTS11 cells Vibrogen 2 up-regulated IL-1β, S25-7 and TAP1 but not IFNγ in the first 24h post-stimulation and in rainbow trout head kidney IL-1β, IFNγ and TAP1 but not S25-7 was up-regulated in the first 24h after vaccination. Moreover, at 24h S25-7 expression was trending down in head kidney. The results suggest Vibrogen 2 is initiating antibody production in rainbow trout via the pro-inflammatory pathway while the MH class I pathway is also activated. Further, it is possible that 14-1 or INVX rather than S25-7 is involved in MH class II presentation in rainbow trout head kidney. It appears both MH class I and MH class II may be involved in the development of long term immunity in fish and thus, both pathways should be considered when developing vaccines in the future.