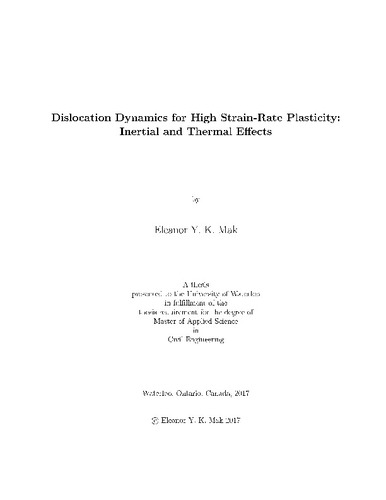 There has been a trend of miniaturization in recent technological advances, particularly through the development of microelectromechanical systems (MEMS). To cope with the demand for increasing performance from ever smaller components, alternatives to traditional scaling techniques is required, for example, by exploiting scale-dependent material properties. The investigation of material behaviour through computer simulations is an attractive alternative to experimental techniques which are limited by scale and cost. Metallic crystalline solids are commonly the material of choice for MEMS components. The majority of a metal’s capacity for deformation is irreversible, otherwise known as plasticity. The dislocation -- a defect in the crystal structure at the atomic level -- acts as the microscopic carrier of plasticity. The Discrete Dislocation Dynamics (DD) family of numerical models serves as a bridge between an atomistic and a continuum description of plasticity at the mesoscale. In continuum models, plasticity is captured through the homogenization of localized effects induced by dislocation activity. With DD models, the activity of discrete dislocations is instead explicitly simulated. Conventional DD models are purely mechanical and are based on a quasi-static formulation. For the purpose of high strain-rate loading scenarios, they fail to capture the localized thermal effects which emerge, as well as the inertial effects which are particularly relevant. As such, the fully Dynamic and coupled Thermo-Mechanical Dislocation Dynamics model (DTM-DD) was developed in this thesis to address the limitations of existing DD models in the context of high strain-rate plasticity. Inertia was included via an elastodynamic description of material behaviour and the consideration of dislocation mass; and thermal influences, through thermo-mechanical coupling and the temperature dependence of dislocation parameters. Using the DTM-DD, the high strain-rate plastic behaviour of metals was investigated. The interaction and interference of elastic waves was observed; and the implications and convergence of dynamic dislocation motion was determined. The framework of extension load testing was presented to investigate the influence and strain-rate sensitivity of system and dislocation parameters to inertial and thermal effects. The selection of the thermal boundary condition was identified to significantly influence the simulated material response. The nature of temperature dependence, as investigated through parameter studies of dislocation drag and nucleation strength, was shown to be a competition between influences causing material softening and hardening. The DTM-DD was extended to investigate the effect of loading rate on the nano-indentation of a thin film sample. Loading rate-dependent propagation of dislocation nucleation and slip as a plastic front was observed. Ultimately, the investigations using the DTM-DD demonstrate that the interplay between inertial and thermal effects are highly complex in a fully dynamic and thermo-coupled system.